My return to Glenmore this week showed spring is well and truly in the air – at last. There is lots of new growth underfoot and overhead. The trees buds are bursting into leaf, the spring flowers are blooming and the birds are chirping merrily – at 4am!

Wood sorrel is in bloom under the birch trees where it makes a dash for growth in early spring before the tree leaves cut out the sunlight. The slender, red-tinged stems each support a single, delicate creamy-white, bell-shaped flower. A series of thin lilac or mauve veins runs from the outer edge to deep inside the cup, cleverly designed to tempt tiny, passing insects onto the creamy-white anthers contained within. The leaves make a tasty woodland snack to munch on as I walk along, but I only eat small amounts as it contains a fairly high concentration of oxalic acid that can be harmful.

Cuckoo Flower, otherwise known as Lady’s Smock and Milkmaids, is blooming along the riverbanks and ditches. The flowers droop and close up at night or during heavy rain. In folklore it was said to be sacred to the fairies, and so was unlucky if brought indoors. It was not included in May day garlands for the same reason.

Great wood-rush is currently in bloom, although admittedly the flowers are not the most conspicuous in the woods.

Great Woodrush is an example of an ancient woodland indicator species. Ancient woodland is designated as being land which has been continuously wooded since AD1600 in England and Wales, or AD1750 in Scotland. (The difference arises because of the timing of available historical survey information.) These dates mark the beginning of reasonably accurate historical information on local land use, often in the form of estate maps. In some cases, as at Glenmore, the ancient woodland could have continuity of cover back to the original post-glacial forest.

I spotted my first Dipper for this summer in the river flowing into Loch Morlich. The wee plucky bird was struggling against the strong current created by the snow melt from fresh snow falls earlier in the week.

Unfortunately very high winds last week led to the loss of several nests. I had two intact Chaffinch nests brought to my ranger base and I spotted the remains of another nest at the side of a path. I included the nest on my display table and this lead to several children taking up that theme and creating nests and eggs or chicks from clay at the Young Explorers session. 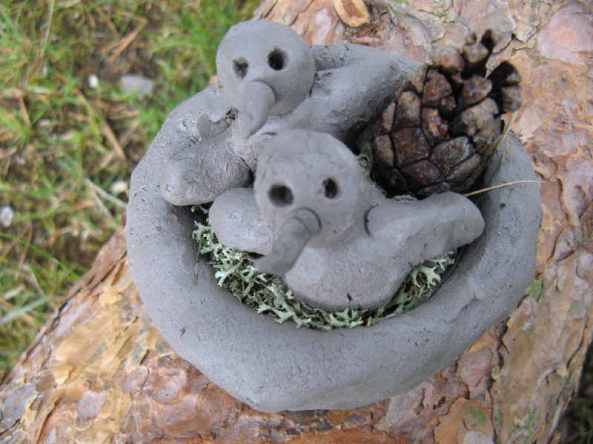 5 comments on “Spring flowers and birds”