The weather forecast was not looking good for my planned mid-week trip in the Cairngorms. Rain, wind, and the summits hidden in cloud all 3 days. But I was psyched up to get out there into the hills, so a change of plan was called for. I browsed the maps and decided that I’d tackle a walk in the glens instead of the tops. Neil dropped me off at Tomintoul and I was to spend 3 or 4 days walking back to Glenmore – to be back for the weekend for work.

Day One: Tomintoul to Linn of Avon

The river Avon heads directly south to north at Tomintoul and the first few miles of the track beside the river are easy going, albeit walking on a surfaced road. This starts as a wide, fertile strath, but slowly climbing higher to the wilder landscape. I saw two estate vehicles about two miles along the track, then didn’t see another soul for 6 hours.

The river is visible most of the way and this gave lots of places to admire the many oyster catchers. These were very noisy as they defended their nests from this potential intruder.

A sign at the start of the glen informs the visitor of seven exclosures, where fences have been constructed around the small patches of natural woodland to protect them from grazing by deer. These fences made the glen look more managed, but since we humans have removed the natural deer control (wolves) they are necessary.

This collage of two pictures with an open area on the left and the exclosure on the right shows the woods are making a recovery. 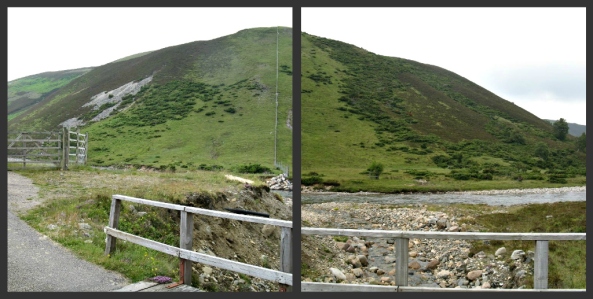 At several places there is evidence of past human activity in the glen.

Eventually the track becomes unsurfaced and follows the river as the scenery becomes more rugged.

Inchrory house is partly hidden behind the trees, but the glimpses of it show it not to be the typical Highland shooting lodge, but what looked more like barracks in appearance. After Inchrory the river changes direction – almost 90 degrees. It is thought that glaciers changed the west to east alignement of the Avon (like the neighbouring Gairn and Dee) to the south to north one at this spot.

At Linn of Avon, the track leads down to the river which is crossed by an iron bridge and a ford.

I choose to camp beside the ford which, thankfully, was free of midges. (If you can’t spot my tent click on the picture and you’ll see it marked on Flickr.)

Appropriately, I thought, I had brought Jim Crumley’s book, The Last Wolf, in which he argues for wolves to be re-introduced to Scotland. With wolves here, the deer exclosures as seen in the photo would not be necessary.

Day Two: Linn of Avon to Fords of Avon

I woke to heavy rain the next morning, but, despite pitching very sloppily the previous night, I and my belongings were dry inside the tent. I was thankful I’d filled my water bottle last night so I could get my stove on for a cuppa before putting on my wet boots. Most of the time I pack and erect my tent with the inner attached to the flysheet, but this was one of the times when the fly was soaking wet and the inner had to be packed separately.

The track heads west from the Linn of Avon starting with a steep climb to rise above one of the exclosures. A wide landrover track heads directly north from here, heading up Glen Loin and may be worth exploring sometime. I know I want to return to hike along Glen Avon another time as this trip was marred by constant rain the entire day.

I stopped briefly for a rest and snack in a pony man’s shelter about 4km from the bridge. The door of this shelter was very warped with getting wet (there was no glass in the windows), and was pretty stuck. But I was determined to get out of the rain briefly that I kicked it until it opened just enough to squeeze me and my rucksack inside.

When I came out of the shelter it was still raining just as heavily and I kept my camera tucked away inside a drybag most of the time. But I took it out to capture this tall pillar which was unusual.

Most of the track along the glen was flooded with a huge amount of water. Initially I used time and energy trying to avoid this. I also had to contend with the numerous burns running down from the hills to the north of the glen, and which I had to cross, being in spate. Inevitably, eventually I slipped when trying to jump one of these, and the water went over the top of my boots. Result = two soaking wet feet! It was easier going after that, as I simply stomped through the puddles.

I called in at the MBA bothy at Faindouran and chatted to three people who were there for a work party. These included a stone mason who was trying to fix the chimney, but who had been rained off and admitted to getting cabin fever. They kindly gave me cups of tea and offered me food (which I declined as I wanted to eat mine to lighten my pack!) and invited me to stay the night as they had plenty of room.

Maybe I was slightly mad, but I decided to carry on and try to reach the Fords of Avon to camp there as I’d originally planned. So after sitting indoors for 2 hours listening to the rain I put on my wet waterproofs and set off into the rain again.

While sitting in the bothy and discussing my plan, the others had suggested I could dump my rucksack in the wee refuge at Fords of Avon while setting up my tent. Then, if no one else was in the refuge, could hang my waterproofs there overnight. That sounded like a good plan to me. However, when I got there I could not get across the Alt Dearg – the burn running from the glen in the north – to the refuge.

The burn is only about 2 metres wide, but the current was so strong that I did not want to risk it on my own. I think it may have been safe with two people crossing together, or even better three, in the tripod formation, but I wasn’t going to try alone. (The pictures were taken about half an hour later, when I got 10 minutes of sun!)

All the ground around the Fords of Avon was wet. Really wet and I had difficulty finding anywhere to pitch was was not in a bog. Eventually I found a wee spot slightly raised from the surrounding ground (only 3 – 4 inches higher) and barely the size of the footprint of the tent. Just before I got the stove going for supper, the sun came out for all of about 10 minutes, so I grabbed my camera and ran around taking pictures. A couple of guys popped out of the refuge too. The noise of the running burns and river was too great to say hello. but we waved a greeting.

I kept on my wet boots and waterproofs, until I’d got some hot water to heat up a dehydrated meal (I know, my MSR Dragonfly is overkill for simply boiling water, but I’d originally planned to be cookingfor Neil and me). I was so glad of a complete change of dry clothes, but I should have packed a small towel – especially when I realised that the every time I went in or out of the tent I had to stand at least one foot in a small bog!

I had an early night, but didn’t sleep well. I woke at midnight to find the wind had changed direction and was now blowing into the side of my tunnel tent. As I was on my own in a 2-person tent, I had room to unfasten a couple of the inner tent clips so it hung clear of the fly, but it was noisy. I got a bit worried at one point and wondered what I would do if the tent collapsed. Do I stand outside and blow my whistle and hope the guys in the shelter come to my aid – if they hear me? Do I pack up in the wind and the rain and start off up the path by torchlight, although I had no idea whether the path was clear or not? Luckily I didn’t have to bail out, but I didn’t sleep well.

The next morning the rain had stopped. Everything, including the ground was still sodden, but it wasn’t actually raining. I was smiling! I spotted another new tent had appeared and an orange one so it was conspicuous for quite a while as I headed north.

The path heading north from the Fords – a continuation of the Lairigh an Laoigh – was more obvious that I’d expected. Of course, being worn by feet, it was lower than the surrounding ground, so was in effect a small stream. I simply stomped through the water again.

It was sunny and showery and for some reason I was ‘running hot’ and overheating in my usually perfectly breathable waterproofs, so I stopped fairly often to put these on and take them off. Although this was my low level option the path went to 800m at one point and I didn’t want to risk getting soaked in case it got colder as I got higher.

The path runs along the eastern flank of Bynack More and passes beneath the Barns of Bynack.

Once past the watershed, the path climbs steadily in the wide Coire Odhar and up to the plateau at 800m. Once on the plateau I saw what I first thought was a line of cairns stretching into the distance. I wondered who had decided to build these.

But as I got closer I realised it was a line of bags of stone deposited by helicopter ready for footpath building.

As I started to drop down I reached the end of the newly constructed path with views of Meall a Bhuachaille and beyond.

After three days with very few people I wasn’t ready to head straight back to Glenmore, so when I reached Ryvoan Pass I detoured to Ryvoan Bothy for lunch before heading out. Luckily this wasn’t too busy, I also spent a little time beside the beautiful wee An Lochan Uaine before walking back to the Glenmore camp site.

I had one day free before working again on Saturday and after a good sleep in my caravan on the site, I felt refreshed on Friday. I intended having a rest day, but as the sun was shining I headed for a day out in the hills and climbed Cairn Lochan walking from my doorstep without having to take any transport at all. I may write a post about this walk shortly.

15 comments on “Three days in the Cairngorms”