Today I went for a wee stretch of my legs in the woods near Loch Dochfour. In fact I ran from the northern tip of Loch Ness, along Loch Dochfour and to the Caledonian Canal which I had approached on an earlier run starting from the sea as described here:

From sea to loch: Running the Caledonian Canal.

I left the car in Dores and headed down a woodland path passing by the Nessie-spotter’s caravan to reach the stony beach on the shores of the loch. This beach gave a wonderful view along the 37 km (23 miles) of the loch. The path here was very wet and muddy, but I didn’t really care if I got all clarty!

I kept to the main (lower) path that followed the southern shore of the loch. This was a delightful path to run along, gravel with soft pine needles underfoot and the trees creating dappled sunlight and giving glimpes of the loch.

Eventually the path led to a wee jetty at Aldourie.

The track now headed uphill away from the loch, but I took a wee detour. I followed a very muddy, narrow path that went through woodland choked with rhododendrons and brambles before coming to the edge of the formal lawns in front of Aldourie Castle.

The castle was originally a 16th century stone tower, but was extended to its present size in Victorian times. Now it is let for holiday accommodation. After getting the picture of the castle I turned back and retraced my steps back to the main track. This track passes Aldourie Farm then crosses the extensive lawns to the rear of the Castle. From here I had a much clearer view of the castle, but as I was unsure of the curtilage of the castle, I tried to pass here discretely and didn’t stop to get another picture. Luckily there were no dogs about at the farm. Frequently I find my best efforts at being discrete are thwarted when a pack of farm or gun dogs start barking when they hear me approach!

I headed up the short climb in the forest and had a great view down to the short stretch of water, the Bona Narrows, between Loch Ness and Loch Dochfour. Again I left the main track for a short detour down to Dochfour Bay. There was a couple of boats moored in this almost circular little bay and just beyond it, the wreck of a hull of a boat lying in the shallows of the loch. Directly opposite I could see Dochfour House with its formal gardens.

After returning to the main track, I ran the length of Loch Dochfour to the pier at the northern end beside a house, boat house and possibly a house boat. I continued a short distance until I could look down on the weir where the River Ness and Caledonian Canal meet and flow into Loch Dochfour.

To return I climbed to a high track in Darroch Wood and enjoyed a nice run along a grassy track – until I found my way blocked by gorse bushes. But I managed to take a slightly meandering route and was soon back at the edge of the manicured grass surrounding Aldourie.

Once past the castle I choose to follow a track closer to the edge of Torr Wood. This track weaves through the woods, with glimpses of open fields to the left. Just before the finish I came across a particularly muddy section of track, so got a further splattering of mud on my legs! All good fun. 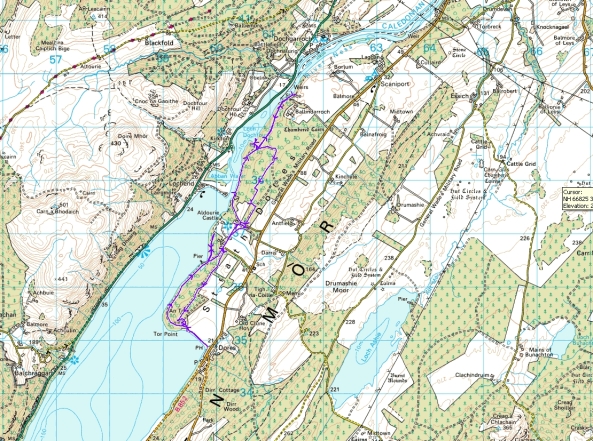