One route that I’ve had lined up for a potential run for several months now is a route around Loch an Eilean starting and finishing from Inverdruie. In fact I’ve had several versions of the route ranging in length from 10 km to 20km. Yesterday I choose to do a 20 km run (and if I felt up to it at the end, I hoped to add on the extra 1 km to make it a Half Marathon distance – just because! ;-))

Inverdruie to Loch and Eilean

I started off on one of the less obvious paths in the area, but one well used by local dog walkers and horse riders judging by the muddy path.

On this well trod path I ran through a wonderful forest of Scots Pines and young Silver Birch, bursting into new leaves of brilliant green. After about 5 minutes, I took a path off to the left that lead to the minor Blackpark road, then left this road almost immediately at track heading off to the right at a cottage. This track meandered past several cottages before arriving at the Rothiemurchus Estate carpark for Loch an Eilean at the end of the tarmac road.

There is a Visitors Centre in an old cottage close to the loch that is well worth a look, but I didn’t call in this time as I was there a little early; it doesn’t open until 9.30am. Loch an Eilein was voted Britain’s Top Picnic Spot by one national newspaper, but if you avoid the high days and holidays (or come early!), it’s not too crowded. I didn’t encounter too many others on the whole route. I met a couple of backpackers heading north, who must have had a lovely wild camping pitch and/or a early start.

Loch an Eilein comes from the Gaelic ‘loch of the island’ and the island which is close to the western shore, has a ruined castle. The castle was once a stronghold of the Alexander Stuart, the Wolf of Badenoch who died around the turn of the 15th century. The castle was once connected to the shore by a causeway but this was lost, and the size of the island much reduced, when the water level in the loch was raised in the later 18th century.

I continued on the shore path on the west side of the loch until I reached the small path off to the right (south) leading to Loch Gamhna. I think Loch Gamhna is even more spectacular than Loch and Eilean.

There are signs at the each end of this path warning “Path Not Maintained”, however, the path is certainly still well used judging by the mud, especially at the southern end of the loch where it is very wet.

When I’d completed the circuit of Loch Gamhna, I think my brain switched itself off and I turned left instead of right! As Loch an Eilean is hidden from view behind trees at this point I didn’t notice my mistake until I’d gone about one kilometre. The worst was when I turned back I had to pass a couple of dog walkers who I’d passed a few minutes before when going the opposite (wrong) way!

Once back going the right way, I followed the east edge of the loch until I came to the junction where a main path heads off east, leading eventually to paths to Loch Morlich, the Lairig Ghru and Glen Einnich, and all points east.

Continuing east I came to the Iron Bridge, also known as the Cairngorm Club Bridge after the climbers’ club who built it in 1912. Here I noted the current in the river was considerable due to the recent fresh snow and snow melt over the past few weeks.

From here I had the choice of continuing on the main path that met with the path from the Lairig Ghru and which headed to the western end of Loch Morlich by the track from Rothimurchus Lodge (a slightly longer route), or heading directly north on what was shown on the map as a minor path. I chose the take the direct route, as my previous moment of inattention had already added two kilometres to my distance.

This ‘minor path’ turned out to be an old, over-grown with heather forest track.

It made a pleasant running route, and I soon reached the River Luineag beside the road. However, there is no bridge here; the old track simply fords the river. So that is what I had to do. I thought the water looked as though it would be about mid-calf height, but it came to over my knees in the deepest part. The current was stronger that I expected too, and I was glad I’d spent a few minutes looking for a couple of metre-long thick sticks to assist me with the crossing.

The river where I forded it

Strangely, the water wasn’t as cold as I imagined it would be. My legs and feet soon warmed up when I started pounding the track heading back to the start. I ran along the new cycle/walking track, ‘The Old Logging Way’ that follows the road between Aviemore and Glenmore. I was soon back to Inverdruie and according to my Garmin, I’d run 22 km. I’d had several stops to check my map and Garmin for directions, to take photos, to sip water, and dive behind bushes(!) and I’d gone slowly, but I was pleased with how the run had gone.

The temperature, at about 8-10°C,was perfect for me for running, but unfortunately the grey clouds didn’t part at all so the photos are rather dark and do not show the area in all it’s glory. 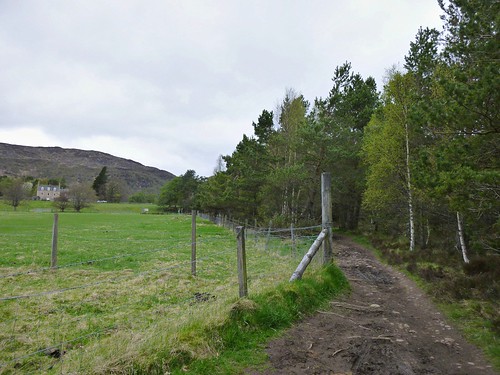 After the run I took myself off to The Potting Shed, the tearoom at the Inshriach Nursery. This is known locally as The Cake Shop and I soon found out why. I had thought I get a nice bowl of soup and maybe a wee slice of cake, but I found out the only food they serve is cake. Hot and cold drinks and cake. BIG slices of cake. It would have been rude not to try it once I got there (I’d heard about the cake shop all the years I worked at Glenmore and never got there), so my post-run fuelling consisted of lots and tea and cream cake.

There are more photos of the area in sunshine in two of my previous blogs:

Above Glen Einich in the Cairngorms

4 comments on “A run around Loch an Eilean”