Glen Strae is a small, narrow glen at the head of Loch Awe. The glen is practically uninhabited, with only one farm about a mile from the start of the glen, but it wasn’t always this way as there is evidence of old settlements marked on the OS maps. One of these used to be Tigh Mor, the old house of the MacGregors apparently.

I had chosen to explore this wee glen on foot with a short off-road run. The run started off easily enough with a gentle slow run on a surfaced road. The tarmacadamed section was only about 500m, but the following rough track was pretty level and with a nicely compacted surface made for an easy going start.

The track lead past a duck pond, which seemed to be stocked with ducks – or at least they were enticed there by the wildfowl feeders and had hides. I’m not sure if this was for bird watching or shooting. I hope the former.

Continuing along the track I soon reached a lochan (un-named on the map) and the first views of Beinn Mhic Mhonaidh with it’s summit shrouded in cloud. Shortly after I soon reached the bridge across Allt Dhoirrean, although the swimming hole beneath the bridge didn’t look too inviting today. I’ll have to return in the summer.

I was running along the glen quite happily when I spotted a few Highlan’ Coos ahead of me. I’m not too bothered by cattle, having been born and raised on a dairy farm. In fact by the time I was about 9 years old I’d be routinely bringing in the cattle each day with only my younger brother and farm dog to help me. These Highland coos however didn’t look like they were used to being herded or told what to do. There was about five or six standing in the middle of the track and maybe another 10 or so at the sides of the track. As I approached, I shouted “Eye up!” and waved my arms about vigorously hoping the cows would get off the track and move onto to the grass to graze. But they didn’t. Instead they started running along the track in front of me. I shouted and waved again, but they kept running. So I stopped and stood still, and the coos stopped too. Still on the track. I walked on, and the cows ran on. By now we were about 100m from where I’d first spotted the cows and, alarmingly, I was aware that more cows were coming along the track behind me. The moving herd ahead of me included some calves (maybe 4-6 months old) and I think they have become separated from their mothers – who were those who were now running behind me. I didn’t like this situation at all. A beef sandwich is all very well, but I didn’t wish to be the filling in the middle of two (big) pieces of beef!!

This running/stopping/starting situation when on for about 5 minutes before the cows decided to move off the track to one side and I slipped past. I was very relieved, but as I tried to calm my breathing I thought about the fact I’d have to pass the cows on my return – and more to the point, I’d HAVE to pass them next time as I’d be on the wrong side of the glen.

As I passed the edge of one of the many forestry plantations in the glen I caught a more welcome wildlife sight – a group of 4 or 5 red deer hinds scattering off up the hillside when they heard or smelt me. I was also delighted to hear the roar of the red deer stags coming from high in the hills on both sides of the glen. I continued to hear the roaring for the next hour or so, although I didn’t get any more sightings.

Once I was past the last forestry plantation there was evidence of the former villages. The only structure remaining intact was a small sheep pen, but there was heaps of stones scattered around the hillside close to the track.

I had intended to turn back here, as the map showed the track continued on the far side of the River Strae and crossed the river by a ford. But there was a new bridge so I crossed over and continued heading up the glen. The track had now deteriorated and I found it now quite tiring running on the uneven surface. There were numerous small burns running down from the slopes of Beinn Mhic Mhonaidh and I had to cross these by leaping across, or stepping gingerly across stepping stones.

This track ran out eventually where it came to the main river again and this time with no bridge and no obvious sign of the track continuing on the far side I decided this was my turn around point. I’d run 9km by now and still had to return the same way. The map showed more sheilings* here, but I couldn’t see evidence of these on the ground, not even any piles of stones. *A sheiling is a hut, or collection of huts, that was used as a summer dwelling on a seasonal pasture high in the hills.

I ate half a cereal bar and a few jelly babies, washed down with plenty of water and set off back down the glen. This way gave a view of the farm at Duiletter and I could imagine the scene when the glen was home to numerous families living in crofts all along the river side. Loch Awe was visible and I could see the hills of Argyll beyond.

All too soon I encountered the hairy beasts again! Only now they had sent for reinforcements and I was greeted by about 40 head of cattle spread out along the track from where I’d left them after my earlier reluctant cattle droving experience. There was a group of about 20 immediately in front of me – on the track and off to both sides, and three further groups of about 8 each along the track for 500 metres. As I advanced on them this time, the two in the middle of the track stood their ground and stared at me! Not a hint of a movement to make room for me to pass. I looked at the narrow gap between the cows, and looked at the size of the horns and decided I was not going anywhere near them! As I said, I’m not a ‘feartie’, but I’m aware that there have been several walkers injured or killed by trampling cows in the last few years.

I decided if the cows wouldn’t move for me (which they weren’t) I’d have to leave the track and try to walk around them. I dropped down off the track and picked my way cautiously over the rough ground along the edge of the forest. As I rounded one hillock, I suddenly came upon two more of the damn hairy beasts about 5 metres in front of me! At the same time I saw a wooden gate in the deer fence around the forestry plantation about midway between me and the coos. I made a mad run for the gate, scrambled up and almost threw myself over the top. What a relief to be behind the 6 foot-high deer fence. The forest edge has been planted with native trees such as silver birch and alder and there was a layer of bog myrtle growing here too. My legs got rather scratched by the stems of bog myrtle and, as suggested by its name, it grows in boggy ground. I squelched my way along the fence until I reckoned I was far enough past where the cows were on the track. Of course there wasn’t another gate here and, with apologies to the fencers and foresters, I had to climb the wire fence. But I wasn’t quite back where I wanted to be as I had to cross a bog, two burns and another fence (with barbed wire this time) to reach the track. As my feet were soaking wet now, I simply walked straight through the burns. I think I spent about 20 minutes faffing about on this diversion to cover what should have been less than 0.5km on the track.

After this I found the rest of the run back along the track was easy-thankfully-as I was tiring somewhat. I stopped for one more photograph of the waterfall and to listen, and look, for the roaring stags. 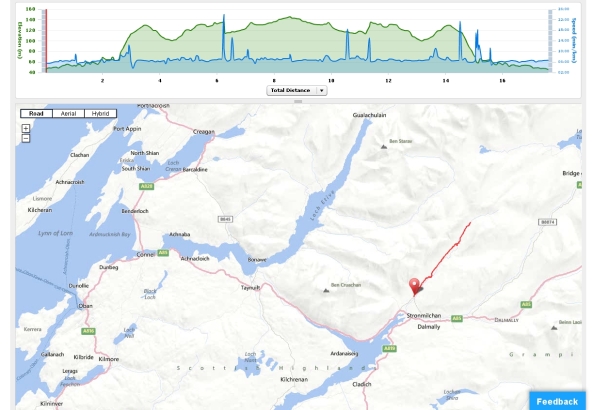 More photos in the Glen Strae set on Flickr

10 comments on “Of bogs, burns and big hairy beasts”