After my success in the wee duathlon I participated in last month, I thought I’d give the next one in the series a go. This series of duathlons organised by No Fuss Events is termed the Winter Feast series and this month’s event was the ‘Main Course’. Naturally this was bigger (tougher and longer) than last month’s ‘Appetiser’. This consisted of a 8 km run on road, beach and ‘trail’ ie on the rough grass and gorse at the top of the beach; followed by 25 km (two laps) of a hilly road cycle section and a final 5 km of the same road/beach as before. All of the above took place in the glorious setting of the roads and beaches between Arisaig and Morar, on the northwest coast of Scotland near the Isle of Skye. This location, as you may have realised, is on the edge of the Atlantic ocean and as we were in the middle of a weather pattern with westerly winds and rain and sleet coming in with those winds, was not the balmiest outing.

Fifty hardy runners/cyclists made the trip to the starting point at Sunnyside Croft Camping site, near Arisaig, including me and middle son, Craig. It was cloudy at this point, but with black clouds out to sea, and I dithered over what clothes to run in and what to leave with my bike for the transition. I settled for my wind-resistant running shirt (which later took a soaking on the run) and an extra thin wind-shirt for the bike.

The first part of the first run was a nice 1.5 km run along the minor road. This should have been very easy, but although I’d placed myself near the back of the pack, I felt I was pushing myself quite hard to keep up. The field was pretty fast. I checked my stats on my Garmin afterwards I found I’d run this first kilometre at 05:11 mins/km. As soon as we came alongside the first beach we were hit by the winds blowing in from the sea; it felt as though it would blow me off my feet and I began to worry about the cycling!

We left the road and began about 3km of running on, or just above, the beach. The sections of the actual sand were slow, but not too bad, but the places where we ran just above the beach were hard going. This was either tussocky grass, boggy grass, stones, mud, puddles, gorse or a mixture of all or most of the above! The views from the sandy beaches were wonderful with the Sgurr of Eigg in the front and the hills of Skye beyond. Then the first shower came and we all got a free beauty treatment as our faces were sand blasted with driving rain as we enjoyed the wee bit blowy conditions. 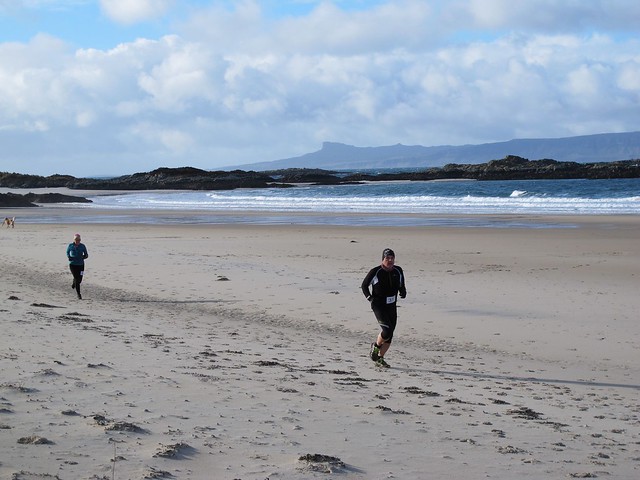 My views was restricted as the wind blew the rain on the outside and inside of my glasses. I struggled to keep them clear and at one point when running along the stony path above the beach I went to run straight through one of the puddles on the path, tripped on a stone, and landed knee-first in the middle of the puddle on another stone. I banged my knee cap and had to limp along for about 100m before I could try running again. Later I discovered a 2 inch-long gash in my leg too!

Anyway, back to running, and the return to the transition point was easier as we went along the minor road. Whilst changing to cycling gear, I downed an energy gel and took a swig of water and hopped on my bike to head out to the road.

(Neil moved on to the silver sands of Morar getting a few scenic shots while he waited for me!)

The bike section was a mixed bag of long slow uphill sections on the trunk road – straight into the head wind, and very undulating return along the coast road. One positive thing about the stormy weather was the ferries to Skye and the ‘Small Isles’ (Eigg, Muck, Rum and Canna) were disrupted today, so this probably kept the traffic volume down on the main road. The road was fairly quiet and wide enough for all the traffic to pass easily. The back road was busier, but that is the road that serves all the crofts. Again all the traffic passed easily.

My main issue on the bike was cold feet. My socks and shoes had got completely soaked on the run, and I hadn’t changed them, so as I pedaled along my toes became gradually colder and colder. No amount of wiggling toes was warming them. The undulating terrain meant was I barely able to get any ‘coasting’ time to take more water and certainly not long enough to get the jelly sweets out of my waist pack for further energy.

I pushed on and when only half way through my first of two laps on the bike was passed by the first few of the leading group on their second lap! Then on my second lap I was passing numerous of the faster people, who had completed the cycle and who were out and back on their final run.

I transitioned to running gear again and set off sluggishly for the final 5km run. This followed the first run lap along the road and beach partway and return by the road.

For the first 20 minutes of the run, my legs felt like concrete (as they do following the cycle part) and my feet felt like… actually nothing! I couldn’t feel my feet! Certainly not my toes. There was one woman in front of me and I worked on just keeping her in my sight until I got to the beach. Then when I passed her I had no one visible to pull me on and at one point point when Neil shouted “Keep going! You’re almost there!” I yelled back, “No, I’m not, I want to stop!” But I didn’t, and I did keep going and eventually got bacl.

Further photos in my Arisaig Duathlon set on Flickr.