Earlier this spring I thought it would be a nice idea to try to do a little ‘run tourism’ here in Scotland. I especially wanted to visit some of the Scottish west coast islands that I haven’t been to previously, so I eagerly signed up for the Tiree Half Marathon. For those who don’t know, Tiree is known as the ‘Hawaii of the North’, Not because the weather is quite as balmy as Hawaii (although it is milder and sunnier than much of the rest of Scotland), but because of its beaches and great waves which are excellent for surfing.

Tiree is the most westerly island of the Inner Hebrides off the west coast of Scotland and if you look at a map, you’ll see to the northwest are the Outer Hebrides but due west, across the Atlantic, there is no more land until you reach North America. Tiree is a flat and low lying island with only a few hills and can be windy. Very windy. Hence it’s popularity for wind-surfing and kite-surfing.

Craig and I both signed up to run the Half Marathon and Neil said he’d join us as our photographer and cheerleader. As the island is small at only 20km long and 10km at its widest point we decided it was not worth taking the car across on the ferry and would rely on our bikes. 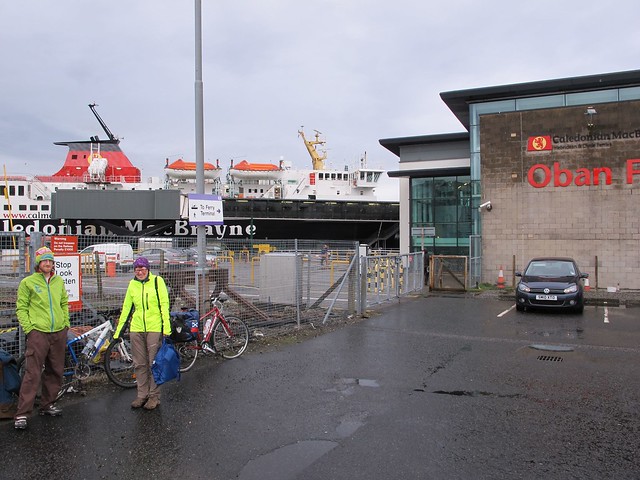 We arrived off the ferry from Oban at Scarinish on Thursday morning and headed to the camp site at Balinoe about 6 miles away. Craig took his camping stuff in his BOB cycle trailer and he loaned me his panniers for my gear (although he agreed to carry Neil and my tent) and Neil had chosen to take his backpacking rucksack with his stuff. However, Neil was suffering with a chest cold and having difficulty breathing so I offered to swap bikes and bags and lugged his pack on my back on the bike to the camp site. 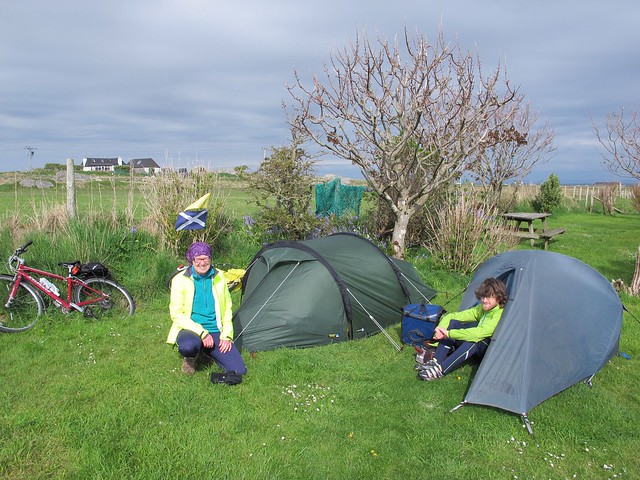 Once we’d set up camp, Neil rested while Craig and I set off to cycle to the bird hide a Loch a’ Phuill. Here we watched greylag geese, oyster catchers, lapwings and gulls on the water and the surrounding fields. 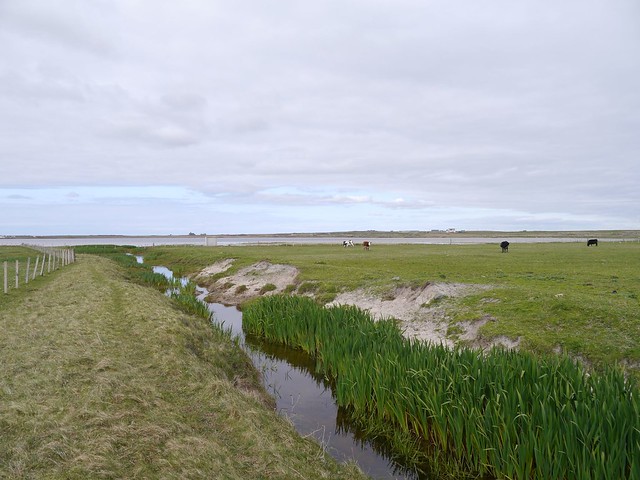 We continued a little further south to Ben Hynish – all 141m high and the tallest point on the island. The top of the hill is crowned with a ‘golf ball’ radar station. This was quite a slog up the road, but a fun whizz down with no traffic (the road is signed for no unauthorized vehicles.) 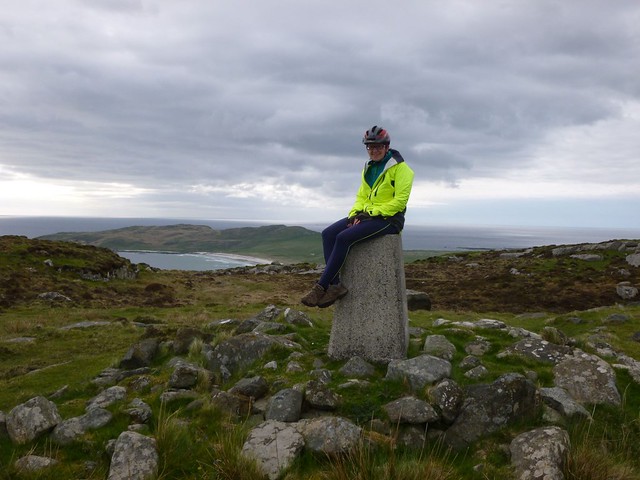 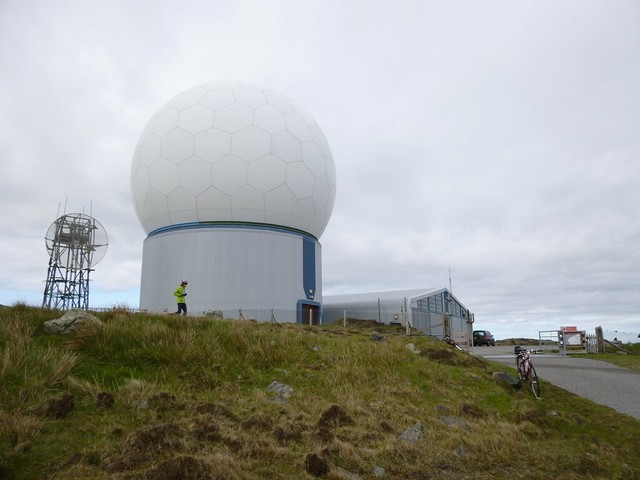 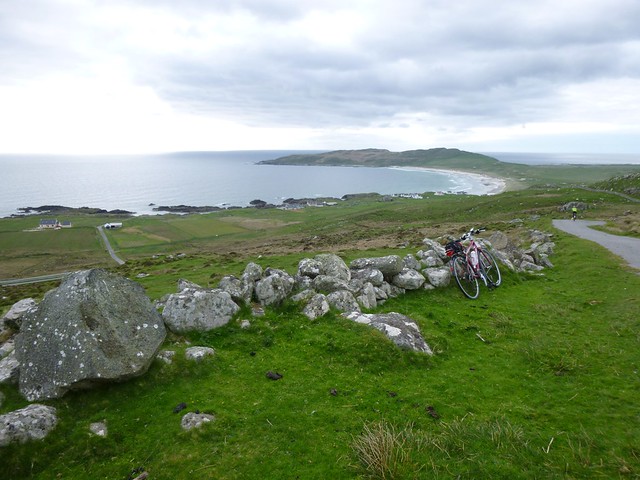 It was a fairly windy night and we were disturbed by our tent flapping a bit, then woken by the dawn chorus of the local birds at 4.30am, sitting singing their hearts out on the wee shrub 3 feet from our tent! The camp site is fairly basic, but has an indoor kitchen and this made it easier to get breakfast organised without having to try to shelter the stove from the wind.

We headed south on the minor road (ALL the roads on the island are single track) that we’d be running on Saturday to the community of Hynish at the southern tip of the island. Hynish was the construction site and site of the signal station for the isolated Skerryvore Lighthouse. Skerryvore is Scotland’s tallest lighthouse, situated on Skerryvore, on one of Britain’s most dangerous rocks, over 10 nautical miles out to sea. There is an exhibition which tells the interesting story of the lighthouse’s construction by Alan Stevenson in 1844. The whole complex of beautifully built stone buildings was restored by the Hebridean Trust and some buildings are now used for holiday accommodation. Read more about it here: http://www.hebrideantrust.com/tiree.htm 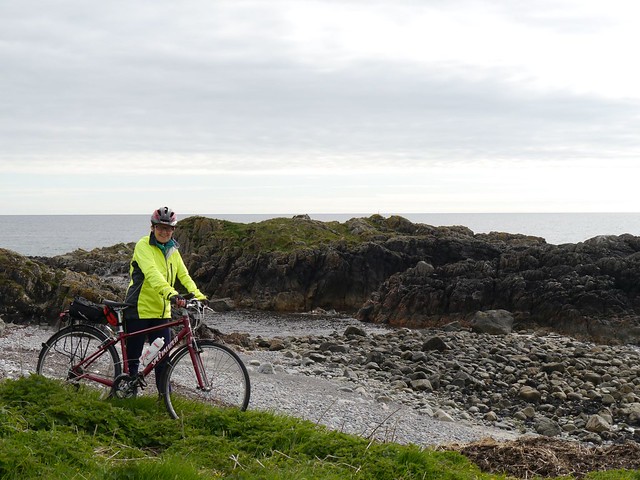 The signal tower (for communicating with the lighthouse keepers) at Hynish 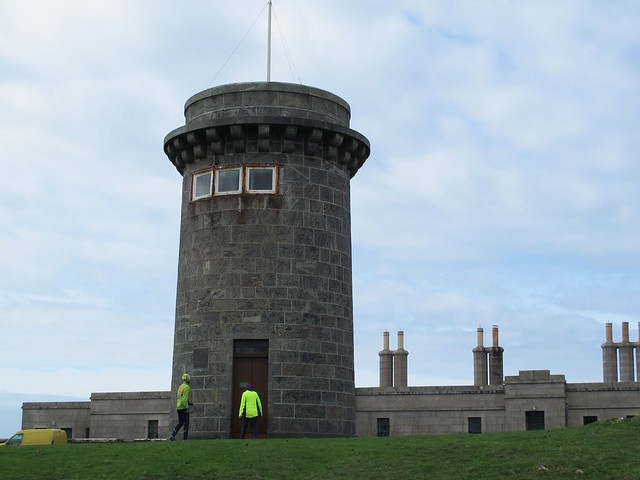 After leaving Hynish we headed north to the airport which, like the rest of the island, is served by a singletrack road. Following this we came to the wide expanse of sand at Balephetrish Bay on the northern shore. 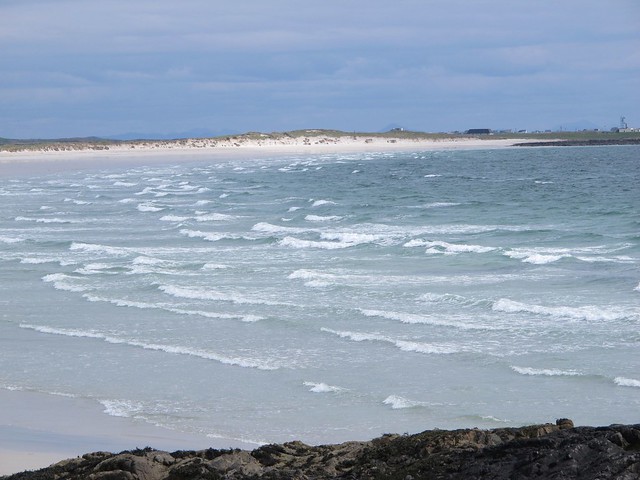 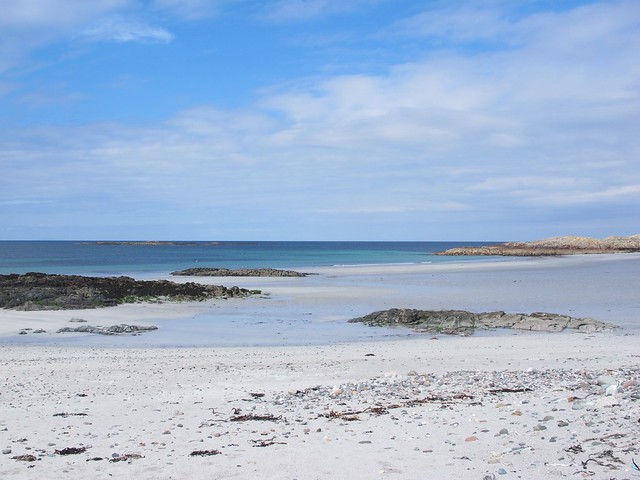 Here we were able to find a slightly sheltered corner where we could hunker down out of the wind for lunch. Before leaving Scaranish we stocked up with food again at the small supermarket. Craig and I chose to head to the community centre after our evening meal for race registration, to save the hassle of doing this in the morning. 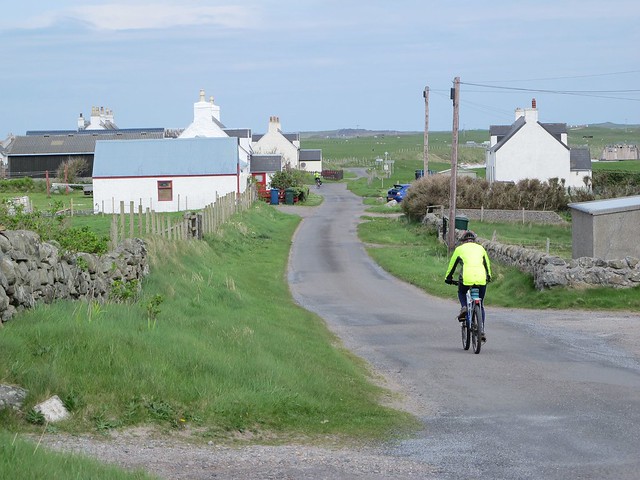 Saturday morning dawned bright and sunny, but windy. Thankfully I haven’t been woken by the bird song at 4am! The Tiree Half Marathon and 10K race both started from the beach close to An Talla, the community centre at Crossapol. The start time of 2pm was late for me to be running, but was set to allow for runners to arrive from the ferry on Saturday morning and several runners arrived at the campsite about noon. We’d already met and chatted to about 20 runners who were also camping, over the previous two days and this created a lovely relaxed, party atmosphere. 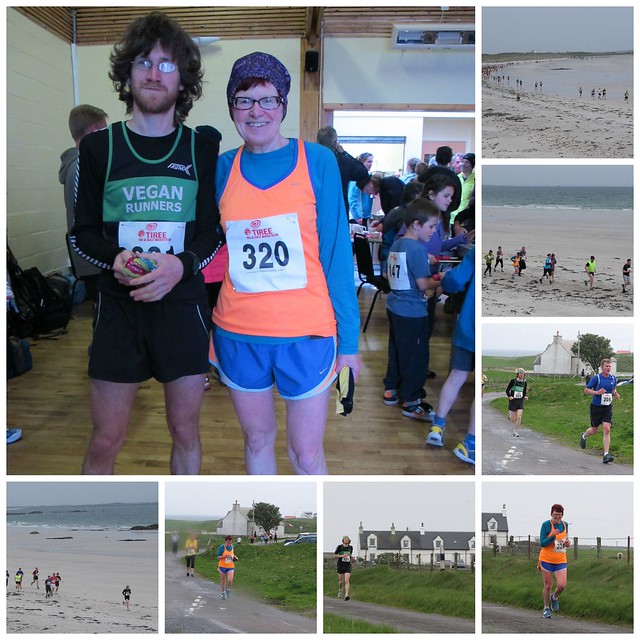 Both Craig and I found the race pretty hard and got slow times. I was disappointed to be 10 minutes slower than I’d hoped, and this was the slowest time of the three half-marathons I’ve run. But the course was hard-going with 2 kms running on wet sand, as we started and finished by running along Traigh Shortobaigh, and the strong wind. It was an nice course, running along the minor roads to the west coast and returning along a stony track, with several twists and turns. I was very glad of the mile marker signs and the super route markers (much better than the last duathon). We both finished and were very glad to return to the community centre for a very welcome cup of tea.

Later that evening I returned to the community centre with other campers to join in the ceilidh with the local young band, Trail West playing. It was a fun evening and brilliant to chat to both the other runners and some of the locals.

We broke camp and loaded our bikes in the rain on Sunday morning and headed back to the ferry terminal. As we neared Scarinish we met cyclists and walkers laden with panniers, or backpacks homing in from hostels and Bed and Breakfast establishments all over the island. I recognised several runners and we chatted as we waited for the ferry. The runners’ camaraderie continued on the boat as runners chatted about races and running injuries in between re-fuelling our bodies with (amongst other things) Cal Mac-and-Cheese, and resting/sleeping. 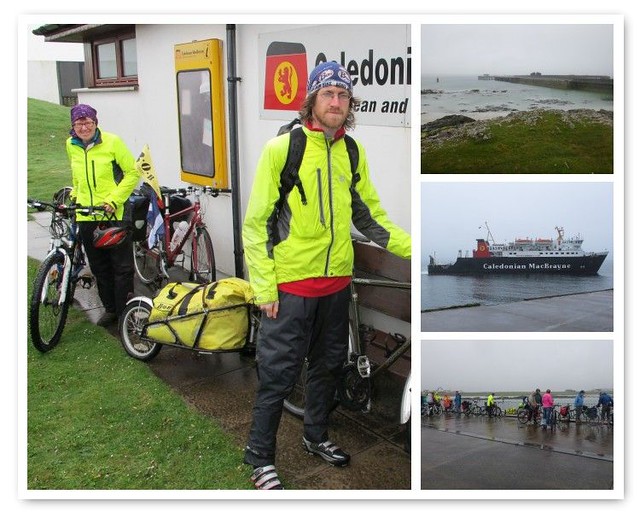 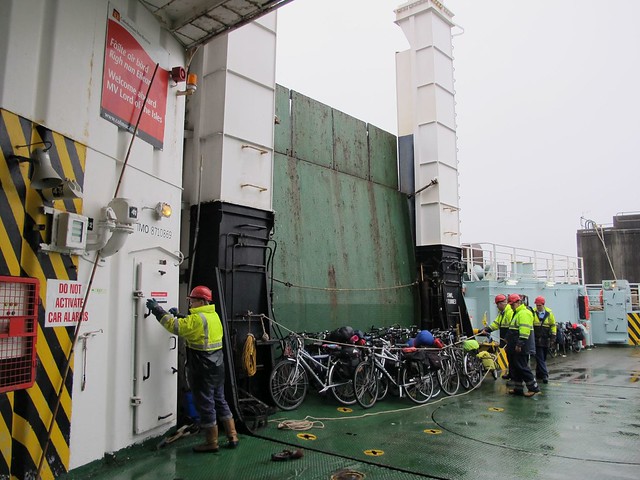 The ferry called at Coll on both the outward and homeward trips. 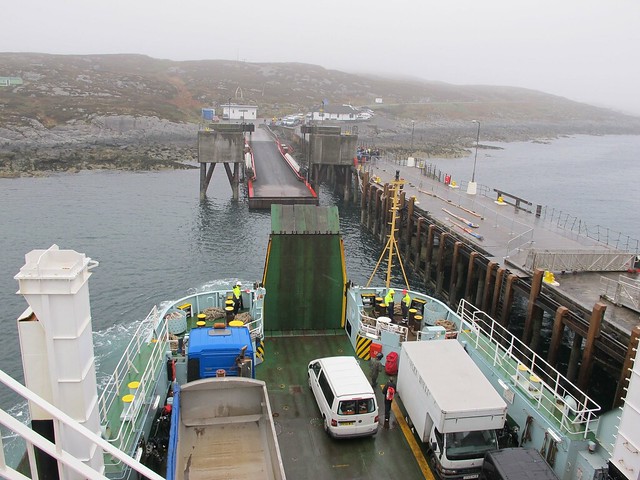