The morning was clear and we were delighted to see Machhapuchhare. 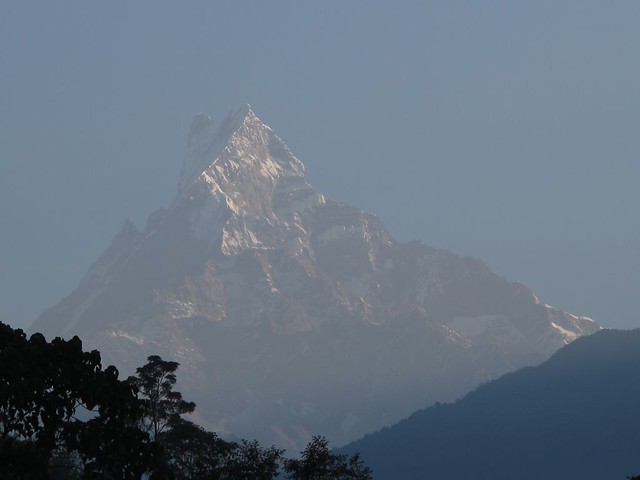 In fact it was a beautiful morning for hiking with warmish temperature and sunshine.

The day’s walk started easy with a stroll along a wide track that, no doubt, will soon be an extension of the road system. We passed a couple of 4×4 vehicles and can understand the locals wishing to use these where they can instead of the mule or pony trains. 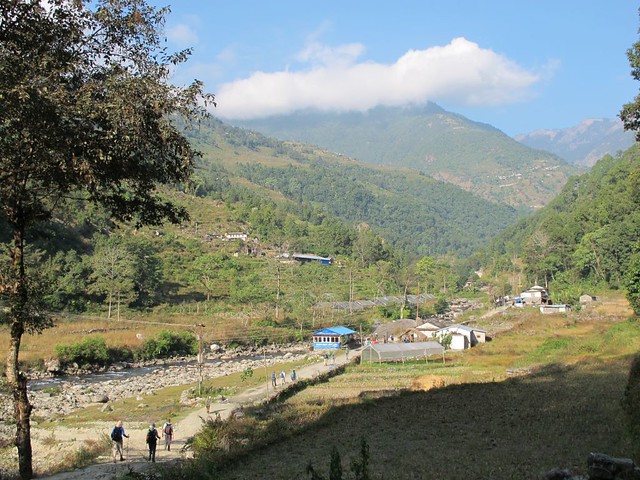 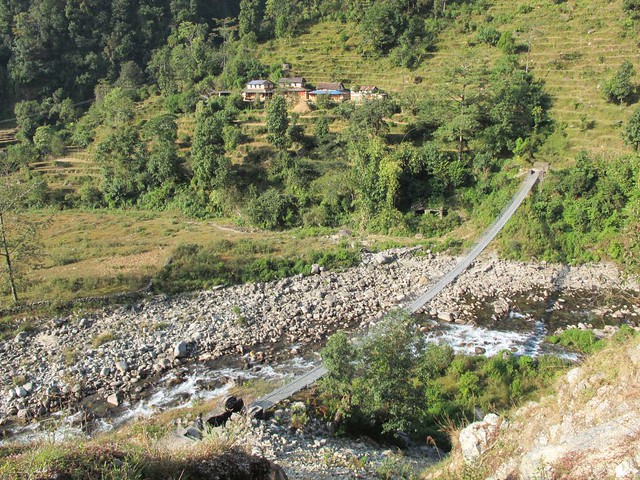 Here in the valley bottom we passed many rice paddies. Many of the fields of wheat had recently been harvested. 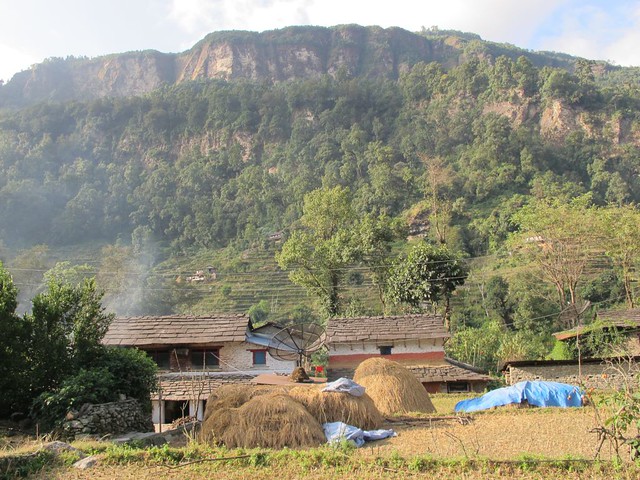 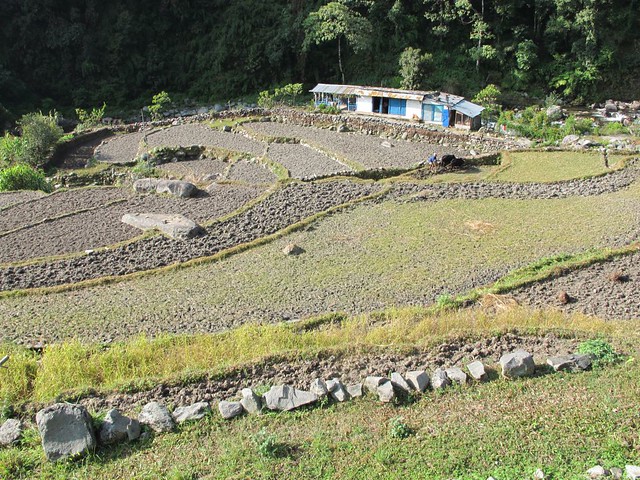 Part of the morning traffic – children on their way to school 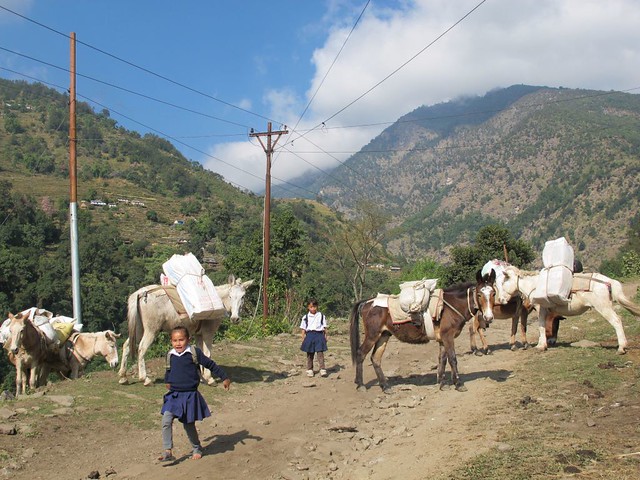 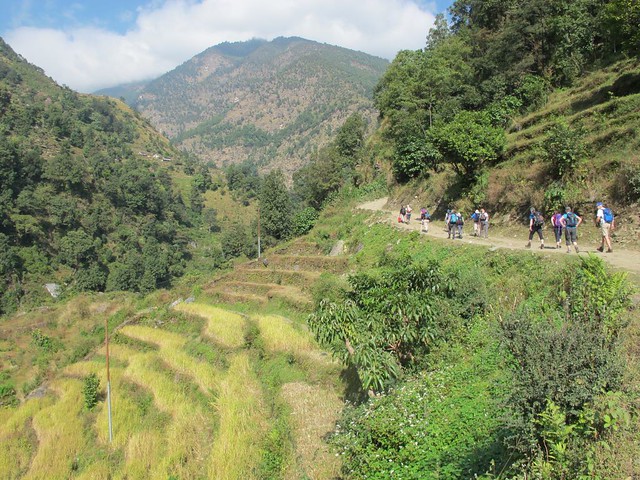 After lunch we left the valley floor and begin the steady ascent, passing through tiny villages and farms with chickens, goats and cows roaming freely. As the slope got steeper the terraces for crops got narrower, but still very productive. The path was undulating, but gradually rising and climbing over 3000 steps in total. (No, I didn’t count them, but was informed of this fact!) 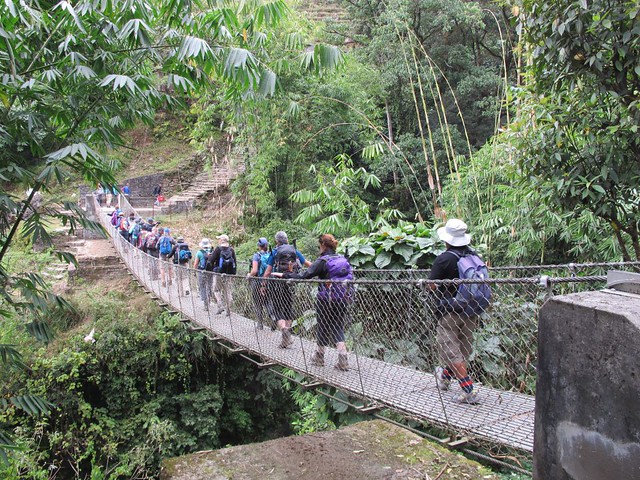 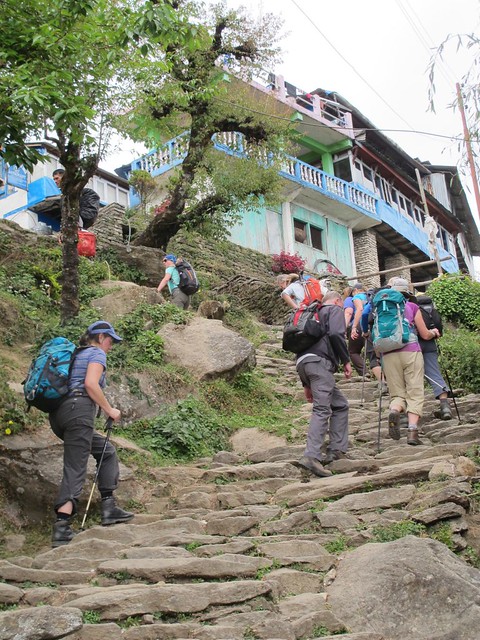 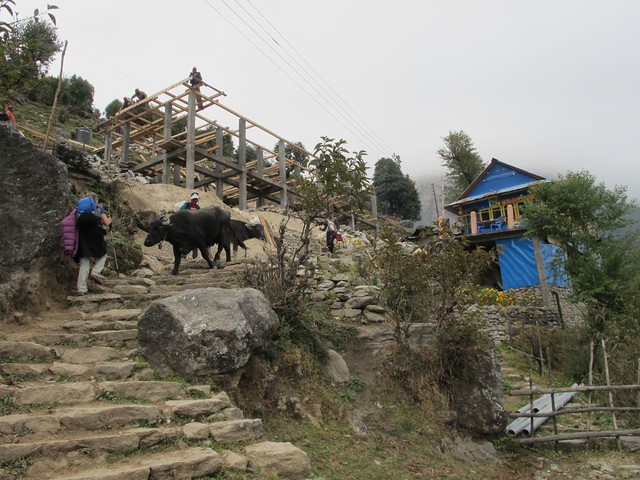 Around Annapurna (and other major trekking areas such as Everest), the most popular form of accommodation is in the tea houses. Teas houses provide food and drinks. Yes tea! Black tea, mint tea, lemon tea, ginger tea, lemon and ginger tea! But also they have simple but comfortable rooms. Most rooms had twin beds (but at the higher altitudes we were in 4-bedded rooms) and mattresses. And that’s it. no en suite, no furniture (except one table) and no heating. These rooms can be very cold, especially at the higher altitudes and we were thankful for our good 4-season sleeping bags. 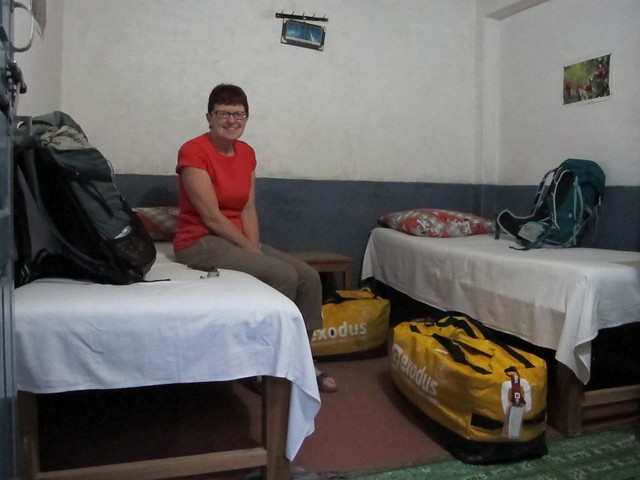 The tea houses have a communal dining area which in some cases was warmed by a wood burning stove – a large painted oil drum with a fire-opening cut into it and which we fed with logs throughout the evening. Once we entered the Annapurna Sanctuary Conservation area there was no heaters in the dining rooms, however we discovered the delights of the ‘tables with skirts’. Here we had the option to pay for the lodge owners to light a gas-burner under the table (which I presume must have been covered with metal) and by sitting at the table and pulling an attached blanket over our knees, we could keep warm knees. Cold toes and a freezing cold back, but warm knees!

The dining rooms were great places to chat to other trekkers and as many are doing the same or similar routes we got to know some who we saw several nights.

Our tea house at Ulleri 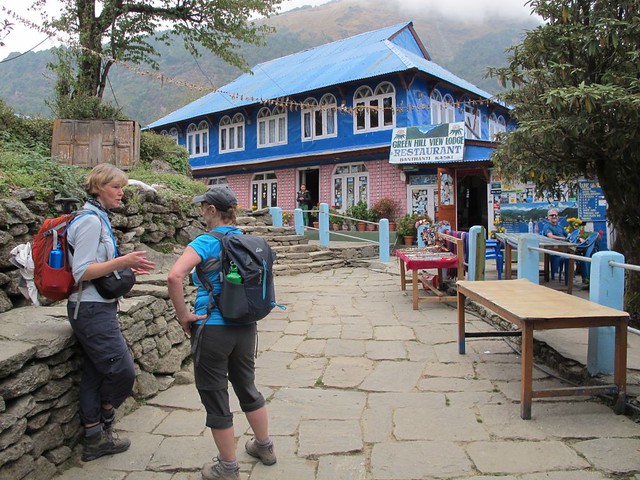 The lodges have simple squat toilets that ofter involved going up and down awkward stairs and/or going outside, so a night-time visit was quite and undertaking! Some of the tea houses had the opportunity to have a hot shower, or at least a tepid shower. The solar showers were usually pretty cold when we were there, but for a small fee we were able to pay for a hot shower on several nights on trek. But these were not long, lingering showers, as they were heated by LPG and we were aware that the gas cylinders had been carried to the lodge by mule or porter. Also the shower rooms were in unheated outside buildings where a quick scrub was all that I cared for.

As I mentioned we had plenty of tea! We were waken each morning by our assistant guides bring hot black tea to our rooms. The we enjoyed more tea with breakfast. We usually stopped for a tea break after a about 2 – 21/2 hours walking or whenever we reached the next suitable tea house, then had a longer stop for lunch (with tea) by noon. We were offered a cup of tea on arrival at that night’s tea house. The tea houses offered a greater range of dishes than I expected, but I soon got into a habit of knowing what suited me for lunch, while still allowing for the fact I had more walking to do. Veggie noodle soup with local bread was both our preferred lunch, then a rice (Dal Bhat or fried rice) or potato (veg rosti) dish for my evening meal.

The tea houses often had a small selection of items for sale, but I resisted buying the choccie biscuits, soft drinks and beer while on trek. It was possible to buy filtered water or boiled water at all the lodges and we filled our camelback at each stop.