I first started hillwalking when I was about 17 years old umpty-dot years ago, way back in the early 1980s. At the time there was no Trail or TGO magazines; all that was available was the Climber & Rambler magazine, which as well as featuring walking and climbing in the UK also featured articles about mountaineering in high mountains such as the Himalaya. I knew I’d never be climbing these 7,000=8,000m tall peaks, but I have wanted to see them since them. So now, almost 40 years later, I managed my first trip to Nepal. Neil and I chose to to travel with Exodus, as this is a company we’ve used before. We like the fact they employ local guides and have a responsible tourism policy and pay the porters a fair wage.

Days 1 & 2: Kathmandu to Birethanti
We met up with the other trekkers in the group in the Royal Singi Hotel in Kathmandu, and enjoyed our last night of luxury, ie sleeping in accommodation with en suite facilities. That night I threw open the window in the bedroom and listened to the noise of the city below as I felt like yelling “I’m in Kathmandu!” I’m not really a city person and wasn’t specifically excited to be in the city, but all those magical Himalayan trips I’d read about began in Kathmandu. 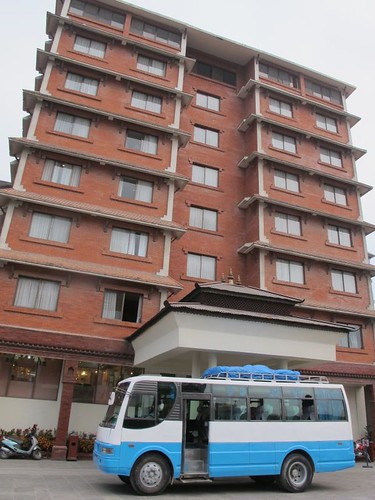 The following day we left the hotel and set off on the drive from the capital city to Pokhara. This 200km drive usually takes about 7 – 8 hours, but this week the road was MUCH slower than usual. The South Asian Association of Regional Cooperation’ (SAARC) was being held in Kathmandu the day we were leaving and the police were stopping and searching many vehicles as they reached the city boundary. This meant a nose-to tail queue of traffic most of the way heading to the city, and therefore less chance for our bus driver to pass the slower-moving vehicles heading west. The tourist buses in Nepal have two drivers. the actual driver and an assistant who looks out and advises the drivers of hazards on the opposite side of the road. 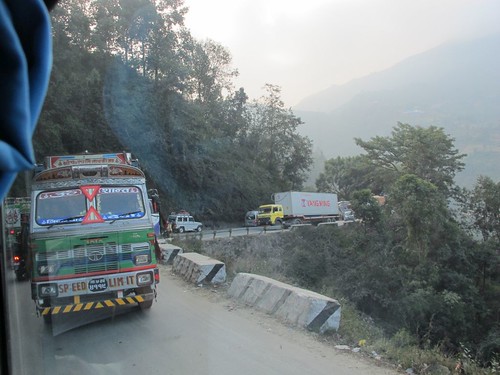 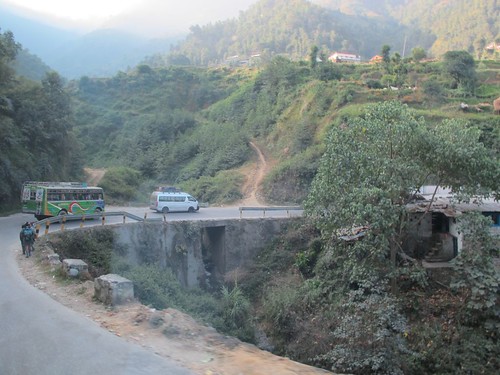 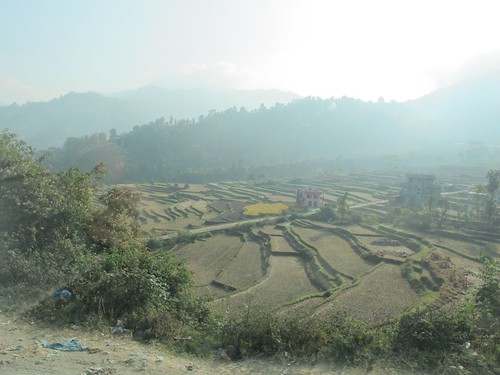 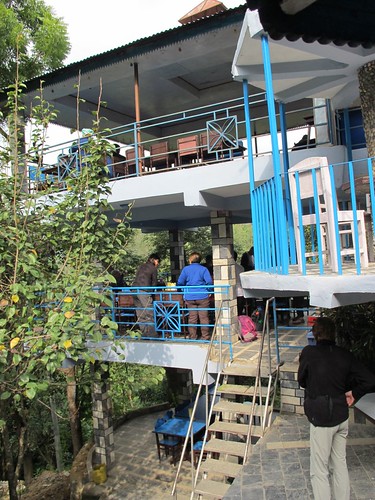 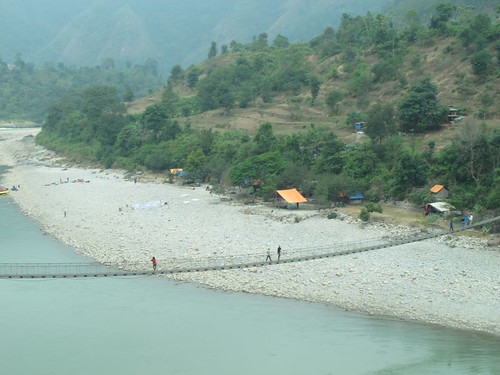 At Pokhara we continued by bus to the end of the road at Nayapul. Nayapul is a new settlement which has grown up to serve the needs of the very many trekkers who depart from here. This village had a track suitable for 4×4 vehicles that runs to Birethanti. 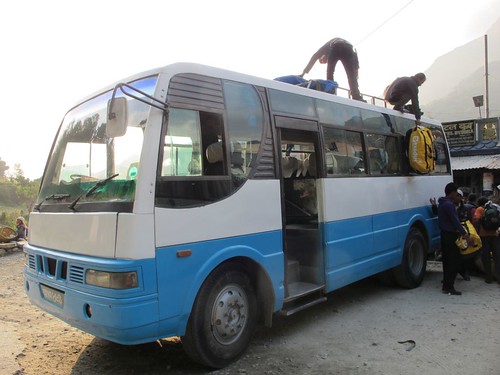 Here our porters hoisted our bags for the short walk through the village, which is a Our first nights trekking guest house accommodation was across the Modi Khola (river) at Birenthanti. 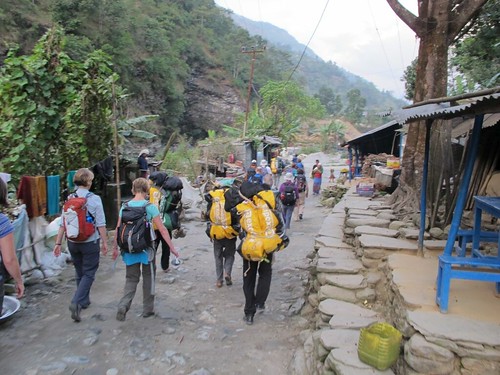 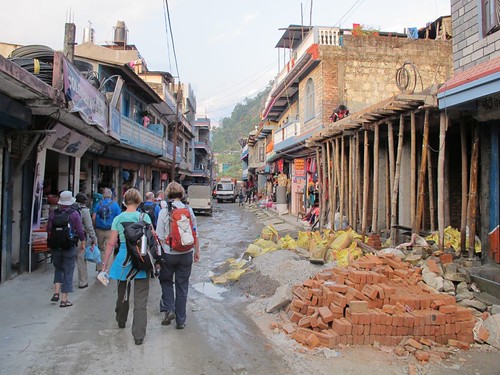 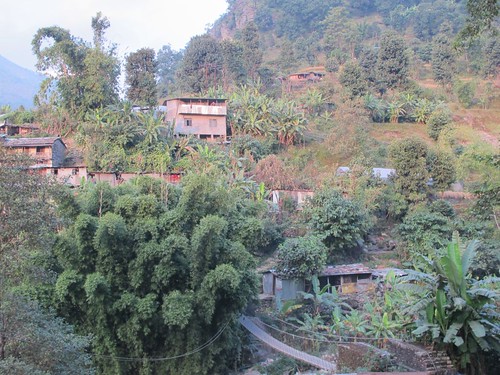 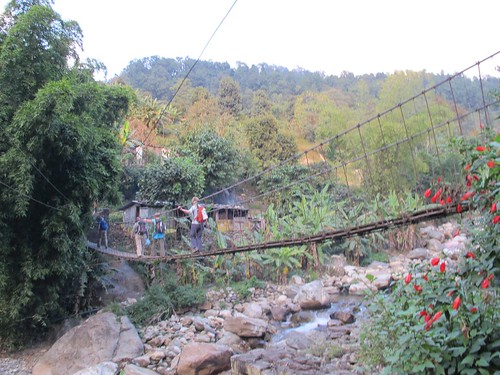 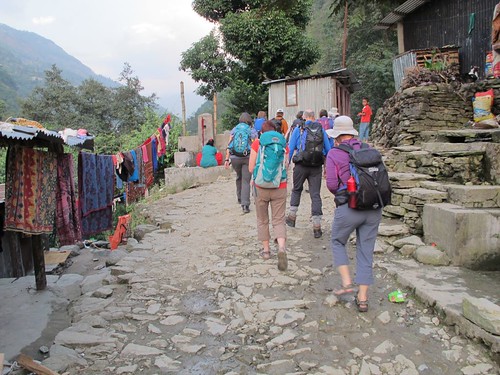 At the outskirts of Birethanti we entered the Annapurna Conservation Area where the mandatory trekking permits are checked at the ACAP check point. 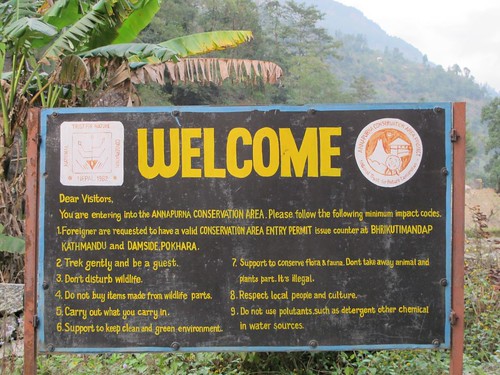 Keshar, our group leader explained that if we were lucky and it was clear in the early morning, we could walk back across the bridge and we should be able to get our first glimpse of one of the mountains we’d get to know over the next week – Machhapuchhare. Known as the fish-tail mountain thanks to its silhouette from this angle, this is at the entrance to the Annapurna sanctuary. Keshar told us of the mountain’s sacred status – of particular significance to Nepal’s Buddhist population. It has never been summited, despite being a 1,200 metres lower than its neighbouring giants. Two climbers attempted it in the fifties, but only got to within 150 metres from the summit. Storms came and washed two villages clean off the mountainside. Any summit attempt is now forbidden by law. 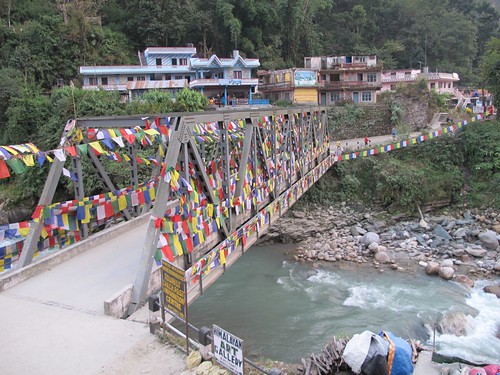 One comment on “Annapurna Sanctuary Trek: Days 1 & 2 Kathmandu to Birethanti”