An early morning wake up call at 5am by Ratner, Nima and Pemba meant one thing: that the sky was clear and our ascent of Poon Hill was on! We just had time for a very quick cup of tea and we were out walking, by torchlight, at 5.30am. The sky was clear and vast numbers of stars were visible. It was beautiful and if not for the fact I had to look down to see where I was walking, I would have gazed at the sky the whole time. It was pretty chilly, but we soon started to warm up as we began the ascent. Poon Hill (3210m) is one of the most famous view points in Nepal and we were far from the only people out on the path up the hill. As we climbed higher the hill got busier. It took us just under an hour to reach the summit and we got there just as the first hint of light was coming to the mountains.

The first light on the summits of Annapurna I, Annapurna South, Hiunchuli and Machhapuchhar 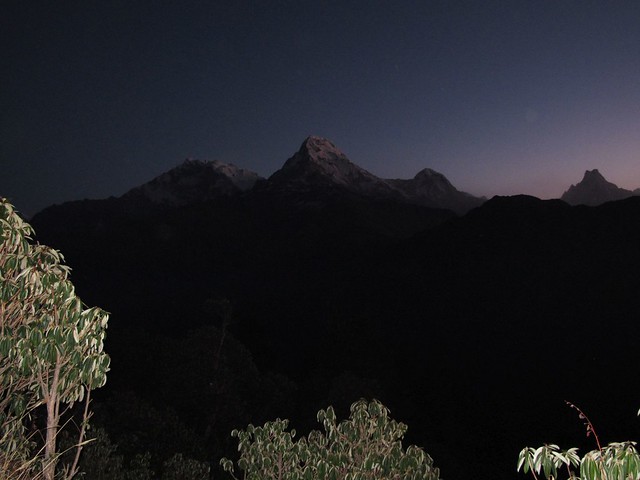 The sun started to inch up over the mountains and gradually touched the snow-capped peaks to show a spectacular panorama. 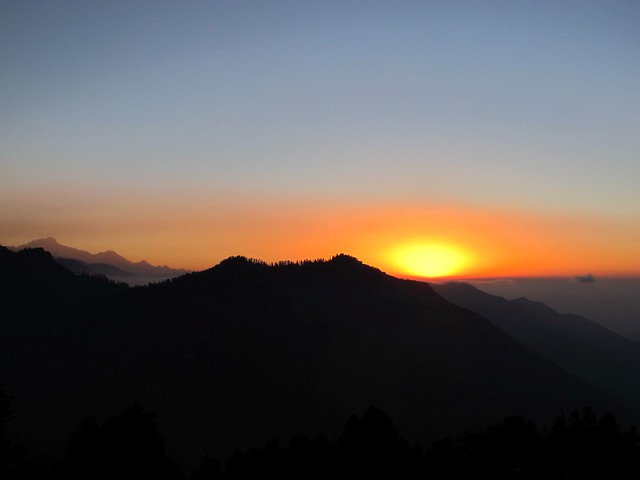 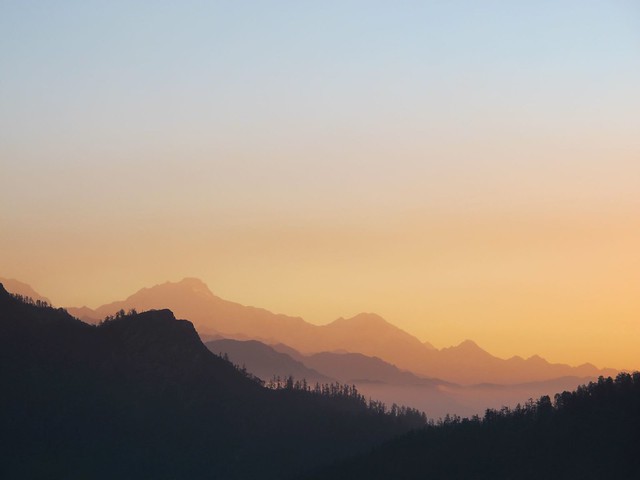 First rays of sun touch the top of Dhaulagiri (8167m) 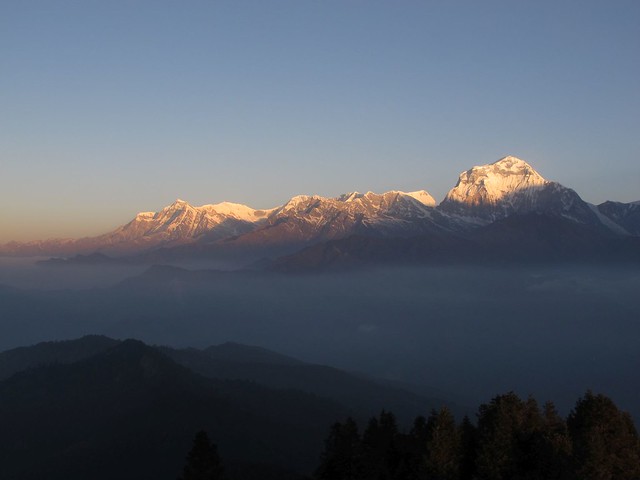 All too soon if was time to leave the panorama behind and head back down to to our tea house for a very welcome breakfast. Then we started a long day’s walk from Ghorepani to Chuili, with more ascent and descent throughout the day. Initially we headed east, following a ridge to cross a pass at 3,193m. 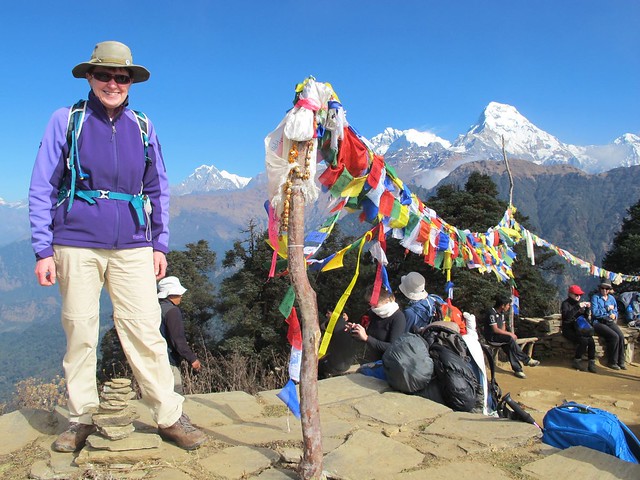 We passed through open country then descended through jungle where we heard monkeys chattering and screeching in the tree tops.

After a stop for morning tea at a tea house we climbed back to reach another small pass at Tadapani where we had superb view of Annapurna South and the peak of Machhapuchhare. 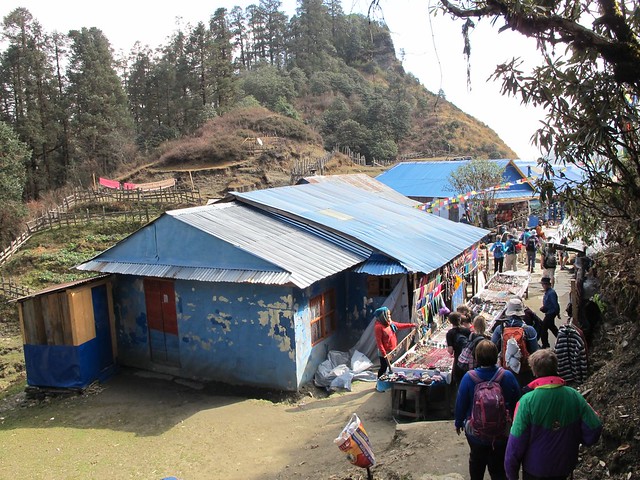 Following lunch we had further descent through the rain forest and were delighted to see monkeys this time. 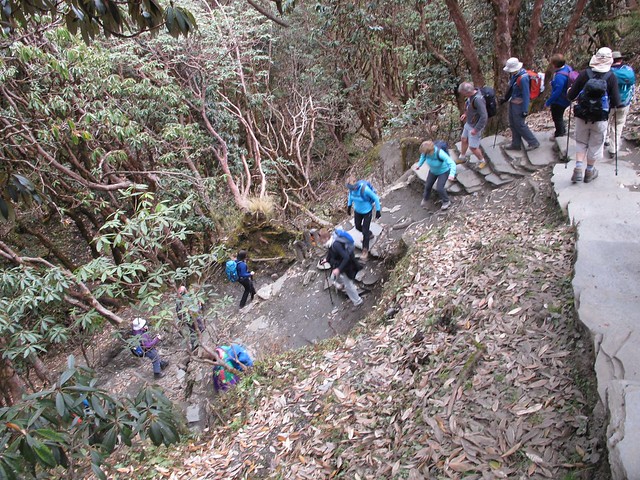 As had been the case for the previous couple of days, the cloud rolled in by early afternoon and hid the distant views of the big mountains. But it was still a very pleasant walk for the final few kilometres down to the brightly-coloured tea house at Chuili. 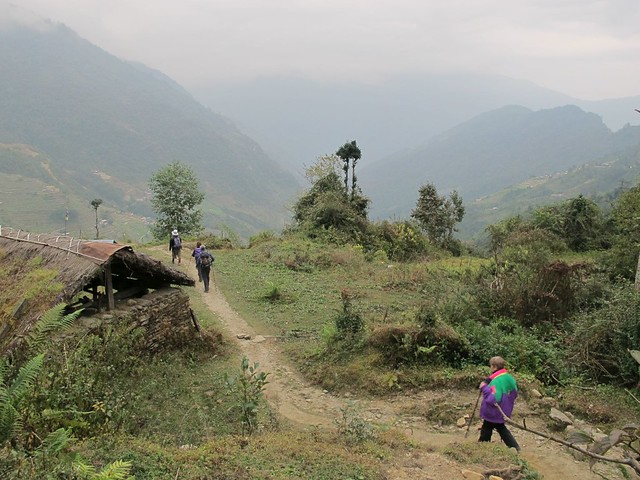 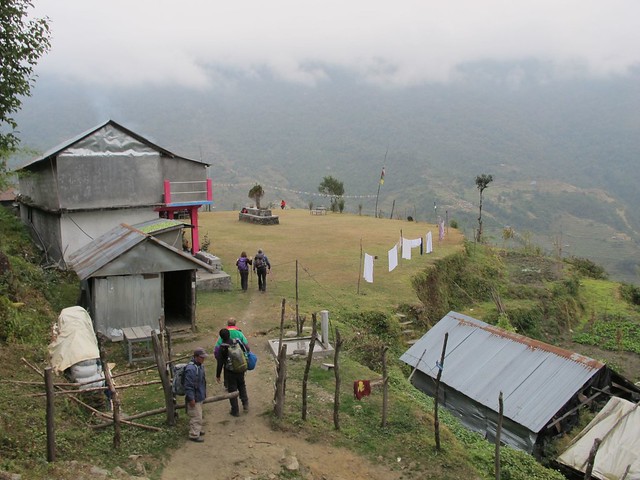 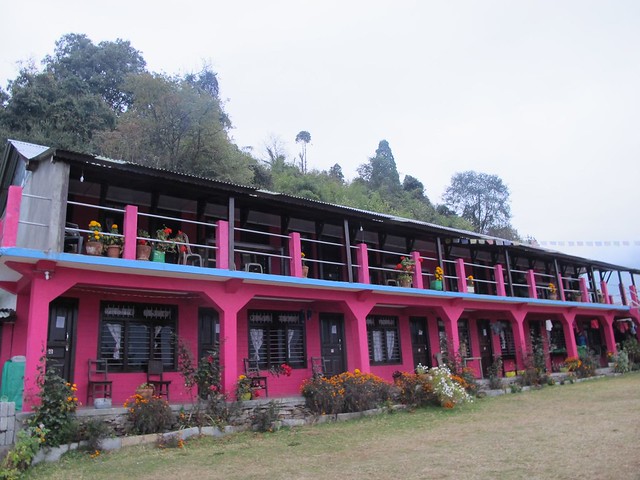 Ulleri-Ghorepani (2885m) We woke to another clear morning and enjoyed breakfast outside on the terrace of our tea house. Porridge, egg and toast and tea. Sustenance for today’s long, uphill walk to Ghorepani. 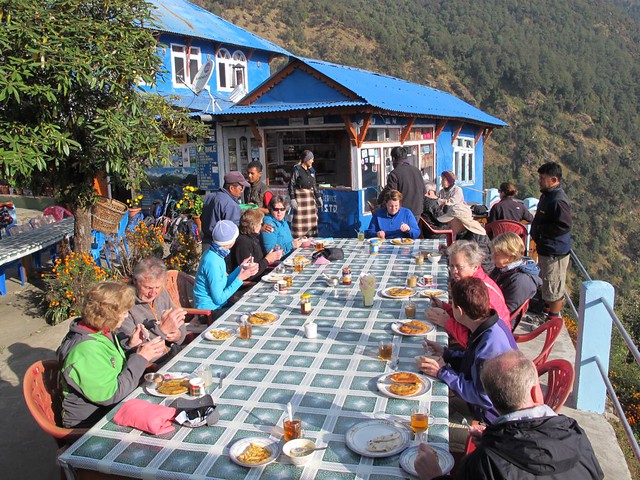 The first section from Ulleri was very pleasant, with stretches of flat ground in between the steps, giving a welcome break and making it an easy walk. We passed by many homes and tea houses. Part way up, the first view of Annapurna South appeared and it was beautiful to see this 8000+m peak. 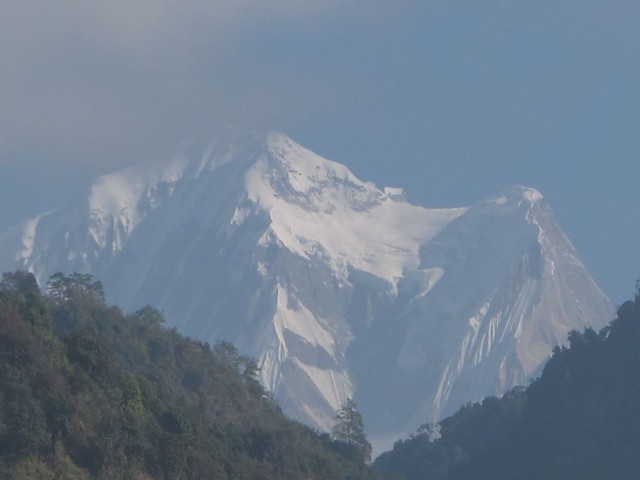 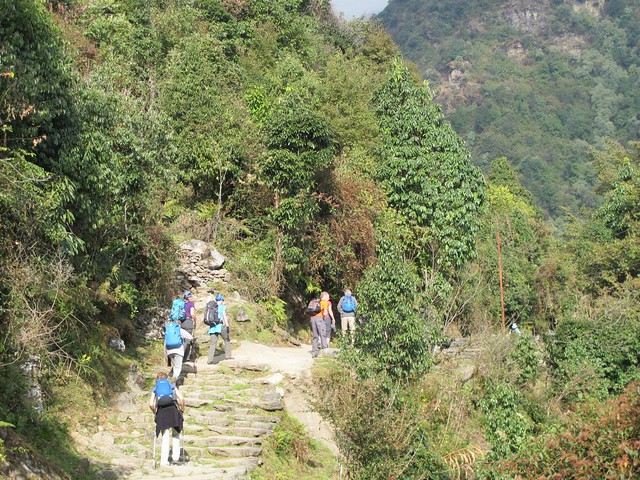 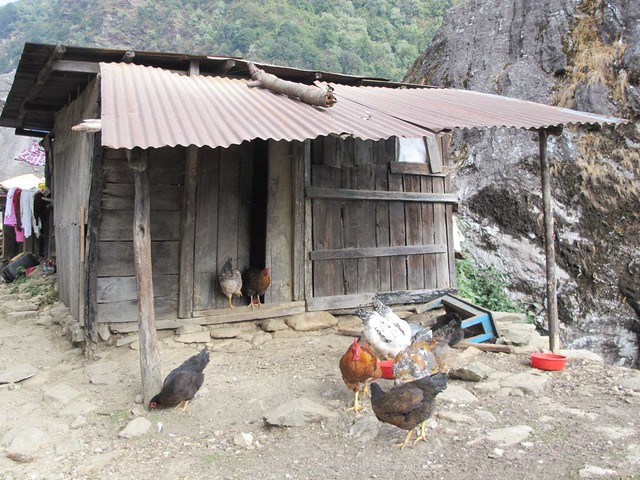 Still higher up we entered a wooded area of rhododendron trees and large bamboo plants. Having crossed a stream, we arrived at the village of Banthanti (2,300m). At our tea break stop, our guide, Keshar find several wild herb plants, including cannabis and other herbs used in cooking growing at the edge 0f the forest. 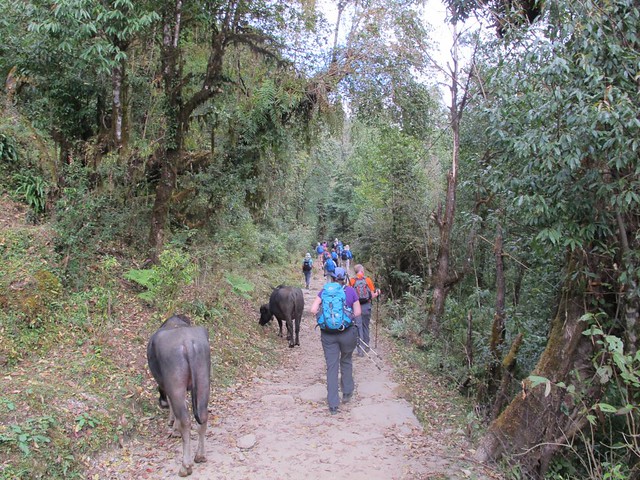 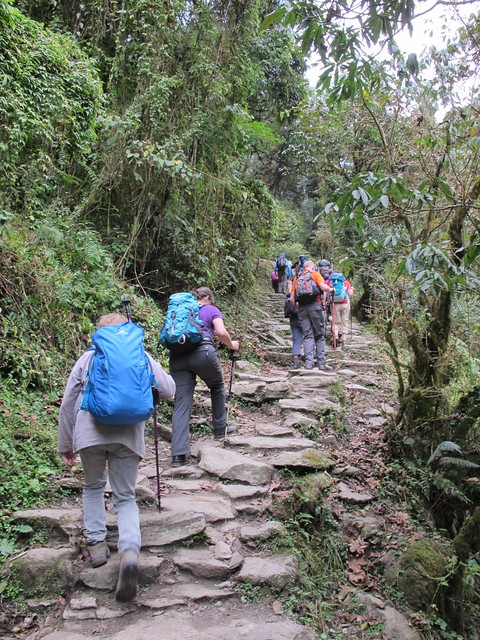 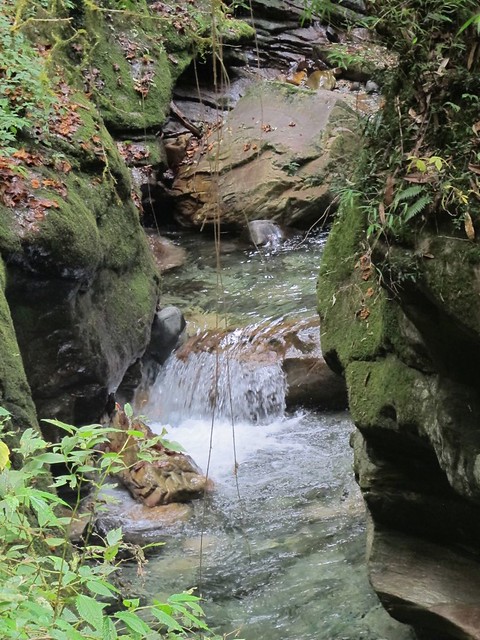 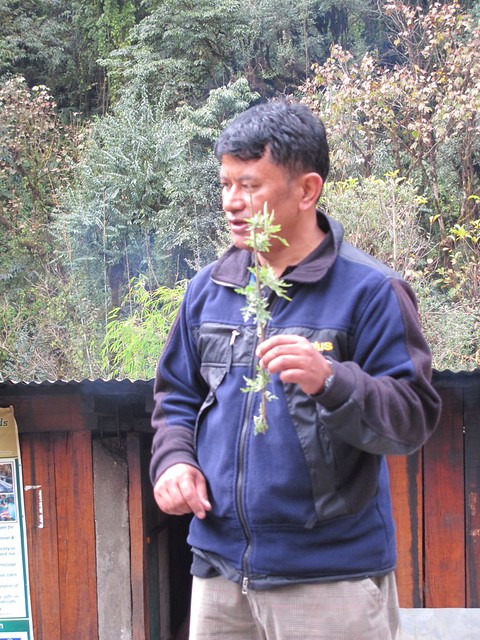 Beyond the village is a jungle of lush vegetation and mossy trees, with small streams and small waterfalls. After following a stream up a narrow valley with more stairs to climb, we emerged from the forest at Nangathanti where we visited a tea house for lunch. 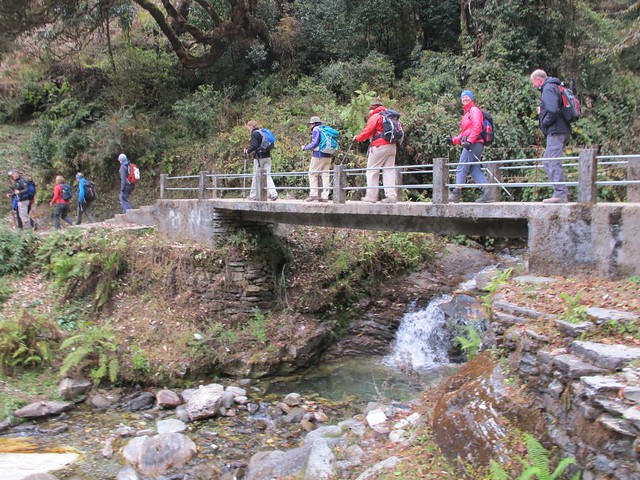 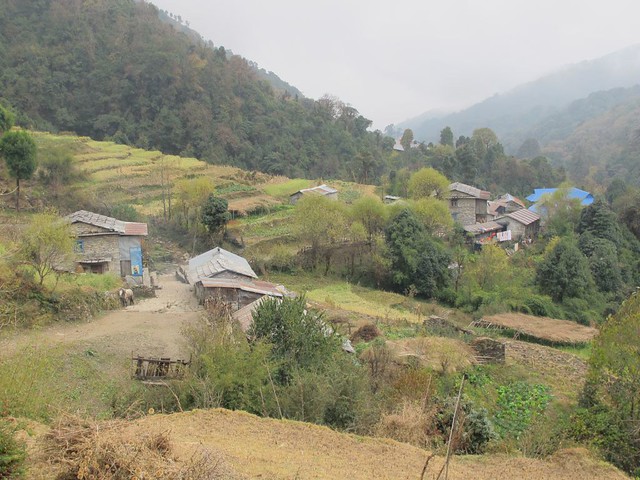 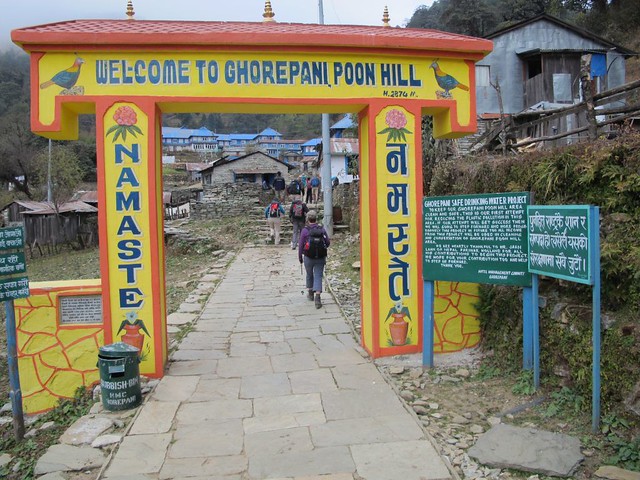 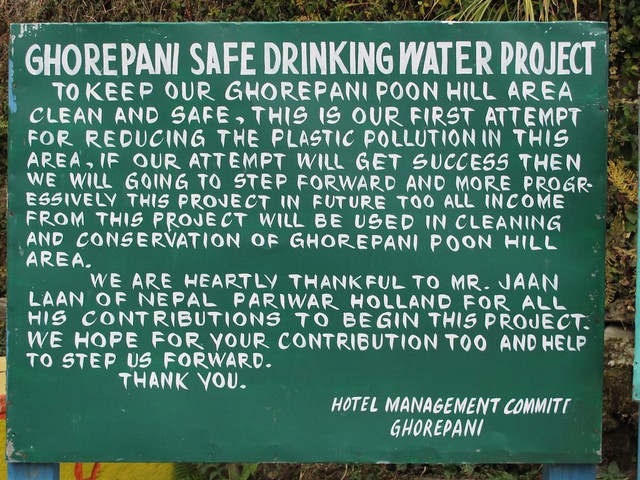 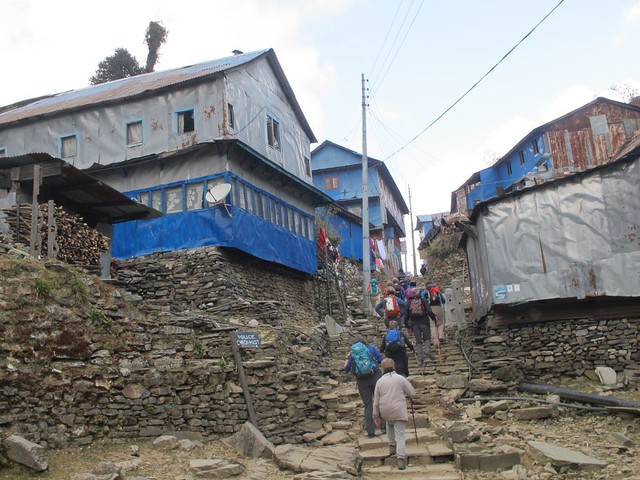 We arrive in Ghorepani in the early afternoon and the ancient village is busy with activity, with trekkers coming from other directions and convening here. Ghorepani is the gathering place for those who want to see the sun rise from Poon Hill, just above the village. That is the plan for tomorrow. After our fairly easy day’s walk we spend the afternoon chatting, quietly reading books and looking out at the thick fog blanket that had completely engulfed the area. We caught a tantalising glimpse of the big mountains very briefly in a wee break in the clouds. Hoping for an evening wind to clear the view for morning, we were in our beds early that night. 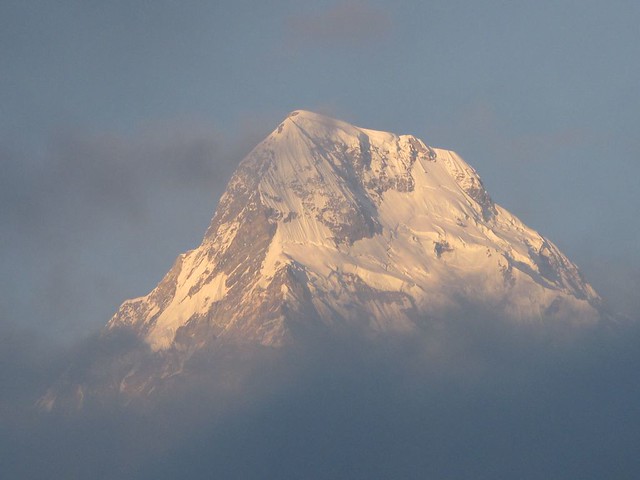