We rose early to see the early light illuminate the big mountains in the sanctuary. I spent some time before breakfast gazing at these thinking about the mountaineers who had attempted to climb them over the years. Annapurna 1 at 8091m (26,545 ft) is the 10th-tallest mountain in the world, but its summit success rate is much lower than that of Everest, and sadly the death rate is higher.

Annapurna I was first summitted by a French expedition led by Maurice Herzog and Louis Lachenal on 3 June 1950. In 1970 the south face of Annapurna I was conquered by Don Whillans and Dougal Haston, members of a British expedition led by Chris Bonington which included the alpinist Ian Clough who was killed by a falling sérac (ice-pillar) on the mountain’s lower slopes. 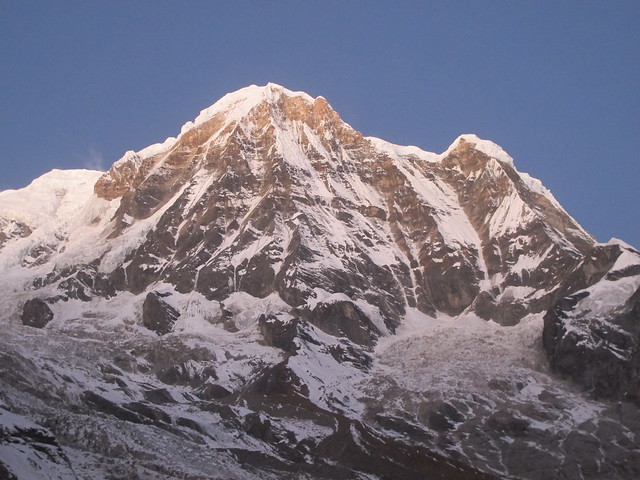 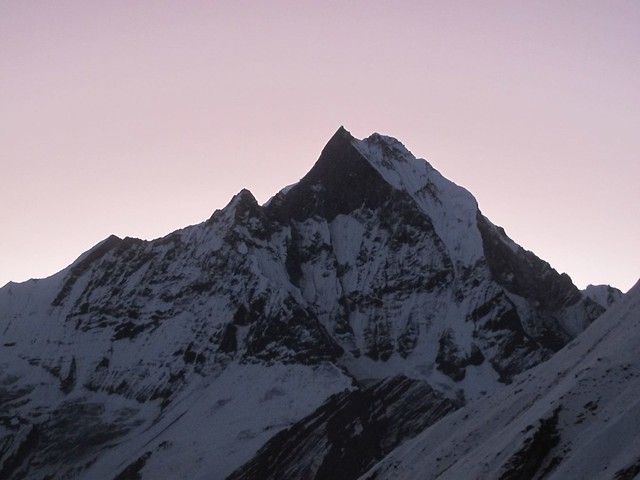 Again we were so fortunate the sky was clear, even if this meant it was a cold start again. As we stepped outside we discovered one of the mountain dogs, which seem to wander from village to village or tea houses, had been sleeping outside. 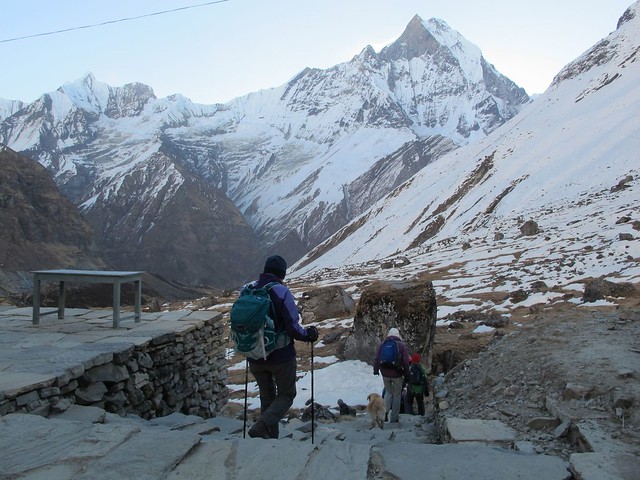 We had a long walk today to get down to Bamboo, passing through MBC and other lodges we’d stopped at for tea, lunch or overnight on our ascent. 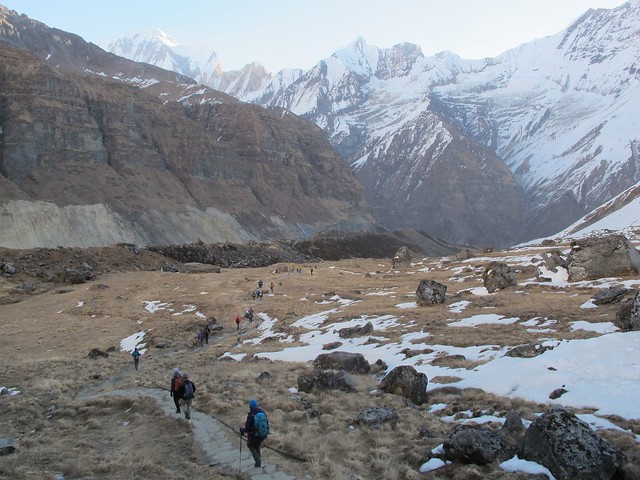 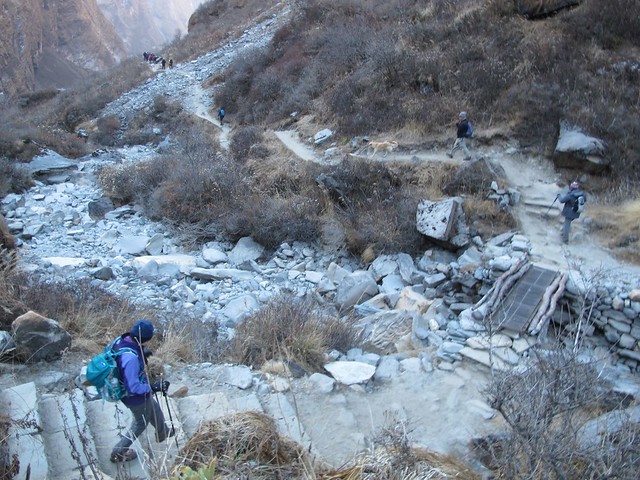 Of course, being the Himalayas, it was not simply downhill, but there was some ascent throughout the course of the day. We passed many trekkers heading up, including some we recognised from other places on the trail. By the time we reached our morning tea stop the sun had come over the ridge and was warming us down in the ravine. 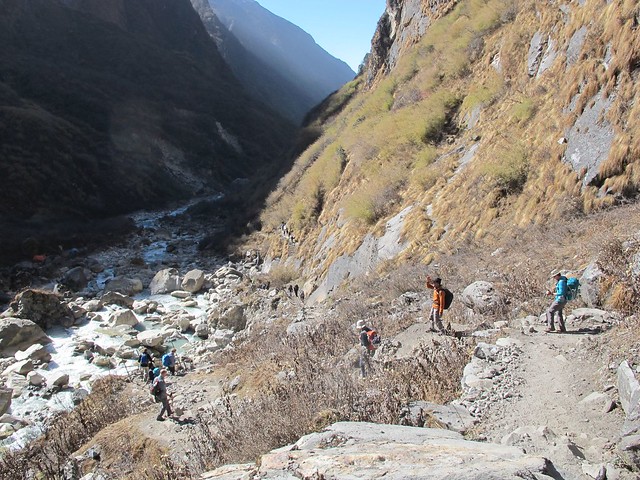 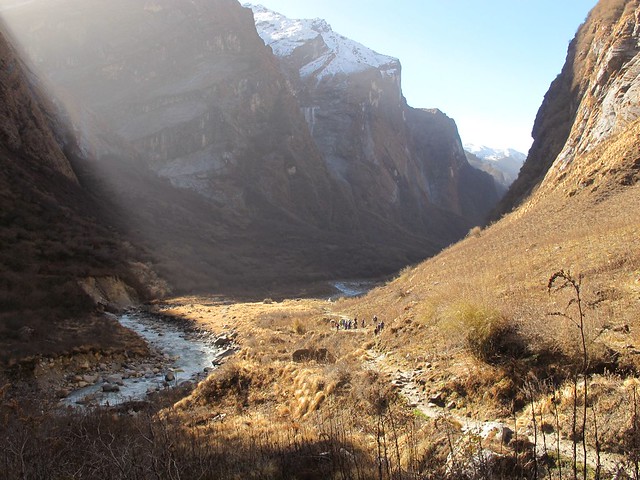 After a couple of hours walking, we left the rocky landscape behind as we entered the cloud forest again. Here there were many small stream crossings and often a precipitous drop to the side of the path. I didn’t enjoy the walk today as, unfortunately, I was light-headed and feeling like I was going to faint! Not good when walking on a narrow path with a drop down to the ravine! This was caused by dehydration and it was my own fault. I realise the mistake I made was not drinking sufficient water the previous day. When I should have drunk extra water to combat the effects of altitude, I had in fact drunk less. With spending the afternoon sitting around at ABC, I had not been continually sipping water, like I had the previous days when walking. Then when I tried to take several good slugs of water in the morning, the water in my Camelbak was so cold it gave me a headache. The light-headedness came on very suddenly and although I took some rehydration powder and lots of water, it took more than 24 hours to recover from this. 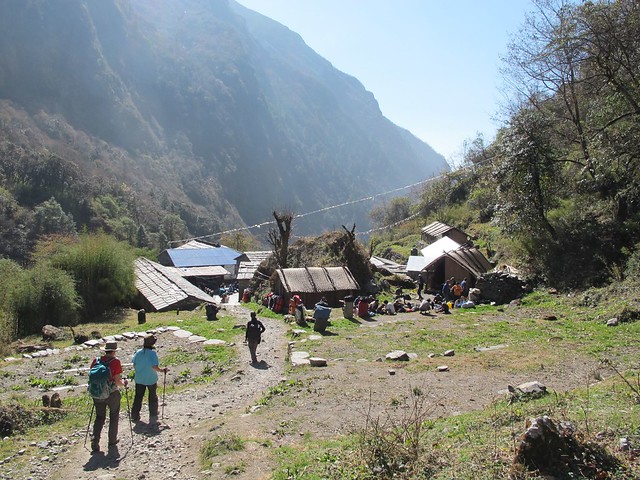 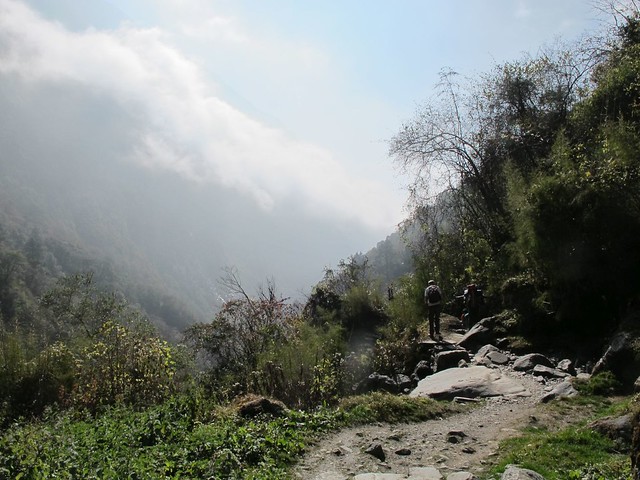 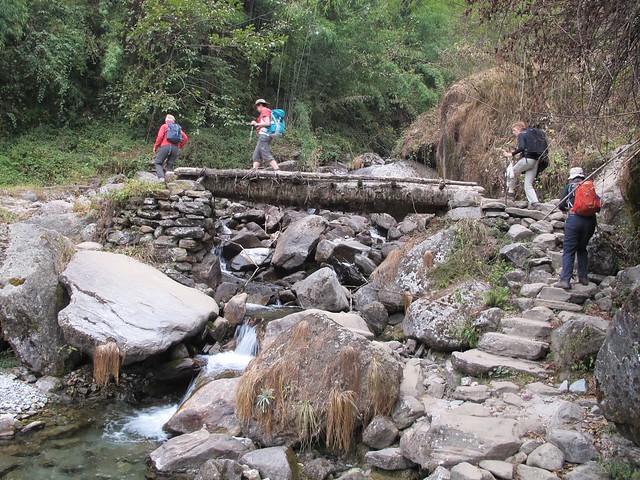 I was very relieved when we eventually reached our tea house at Bamboo that afternoon. The temperature soon dropped when the cloud rolled in. We were delighted to find this tea house had a gas shower, and despite the unheated (ie freezing cold) shower room, it was brilliant to shower after going several days without a shower! 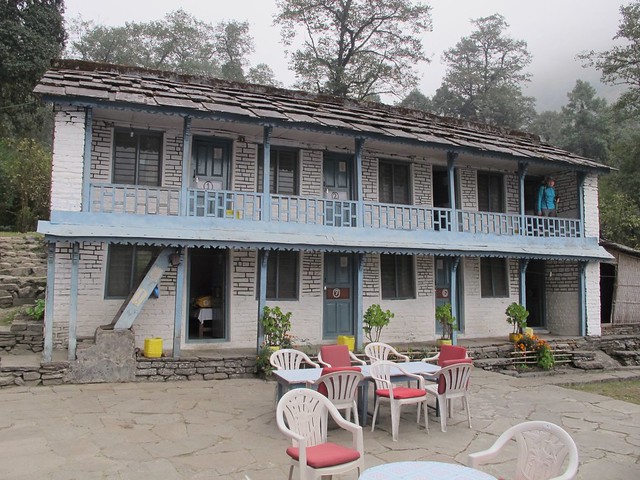 As the tea house at Bamboo is still within the conservation area, they cannot burn firewood, so they did not have an oil-drum stove as we had experienced as some other tea houses. To keep warm in the cold evening, we paid for the owner to light the ‘under-table’ stove as we had at MBC and ABC. This is simply a gas burner that is placed under the table (which I presume is covered underneath by metal) and the table has a thick blanket ‘skirt’. You sit with the blanket on your lap and get warm knees and cool toes and a cold back. 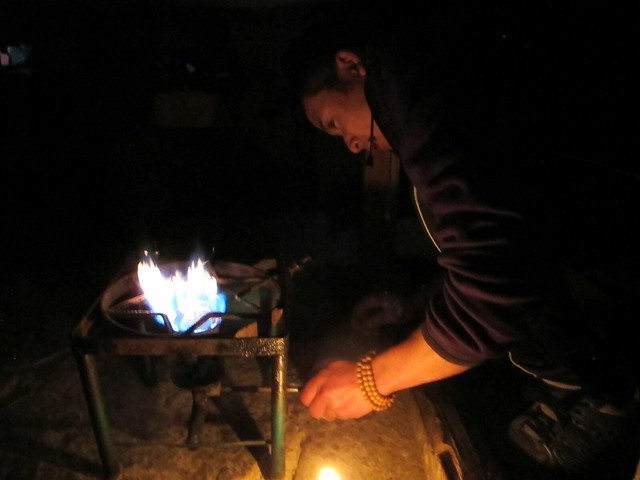 One comment on “Annapurna Sanctuary Trek: Day 10 ABC to Bamboo”