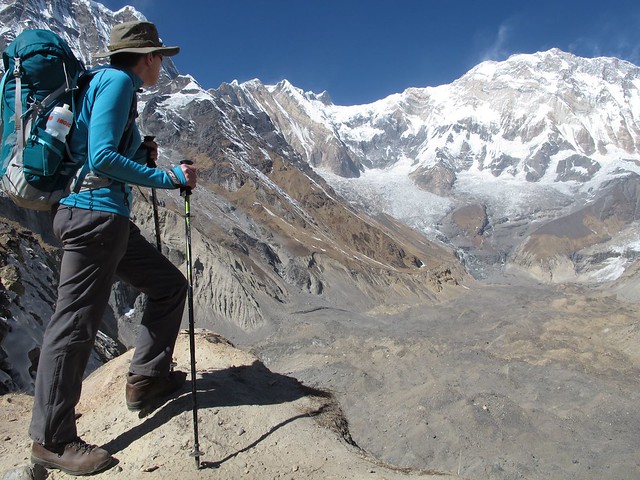 The Annapurna Sanctuary is high glacial basin lying forty kilometers directly north of Pokhara, Nepal’s second city. The Sanctuary is a huge amphitheatre ringed by glistening peaks and is said to be the home of the ‘Gods’.

The entire sanctuary was held as sacred to the Gurung people, the only people to inhabit it before the 20th century. They believed it was the repository of gold and various treasures left by the Nagas, the serpent-gods known in India. The sanctuary was believed to be the home of several deities, from Hinduism and Buddhism as well the older animistic gods. The peak of Machapuchare at the entrance was believed to be the home of the god Shiva, and the daily plumes of snow were thought the smoke of his divine incense.

This oval-shaped plateau sits at an altitude of over 4000 meters, and is surrounded by a ring of mountains, the Annapurna range, most of which are over 7000 meters.

To reach the Sanctuary we trekked along two river valleys, going through remote villages and passing farms with tiny terraced fields, followed by walking up through forested hillsides. Finally we passed a narrowing of the valley and reached the world of rock, ice and snow that is the Annapurna Sanctuary. Here giant peaks such as Annapurna 1, Annapurna South, Gangapurna and Machhapuchhre encircle the natural amphitheatre. Descent was by a more direct route along the river valleys.

The links below take you directly to the post for each day.

Day 8 Dovan to Machhapuchhre Base Camp

Day 9 Machhapuchhre Base Camp to Annapurna Base Camp